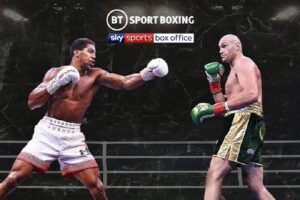 Come the end of the year, and in a perfect rosy world of boxing, both Anthony Joshua vs Kubrat Pulev and Tyson Fury vs Deontay Wilder would have taken place. In an even more rosy world, Joshua and Fury would of won their respective bouts, WBO mandatory Oleksandr Usyk will take step-aside money leaving 2021 for the mega-fight that is Joshua vs Fury.

If only this was the case.

Yes, the two SHOULD win their respective bouts and Usyk should overcome his opponent in Derek Chisora but Usyk has made it clear that he will NOT step aside and be paid off. Very clear.

That leaves Joshua either to take care of his mandatory (Usyk) and risk the biggest bout the world has to offer or to vacate and take the fight against Fury, leaving the WBO title vacant for Usyk against whoever.

It was worse when Dillian Whyte was waiting on his shot at Fury but with Povetkin KO’ing Whyte, that side of things is at least sorted.

Well, December 19th for Fury vs Wilder 3 is off (as a date) and to me, in doubt for December as all is becoming too close for a fight of that magnitude.

“AJ has always had one mission and that is to have all four major belts, be undisputed champion, and he only needs the WBC title now to do that,” Hearn told The Sun.

“But he also wants the biggest fights in the world and, in these uncertain times, if he has to drop one belt to make the Fury fight happen then I think he will consider that now.

“A few months ago I would never have said AJ would even consider relinquishing a title. But AJ vs Fury is the biggest fight in boxing, he really wants that fight, and he will go to great lengths to make it happen, if he has to.”

I thought all was clear but with Joshua’s sentiments on the Fury fight, unfortunately we may not see an undisputed heavyweight champion of the world.