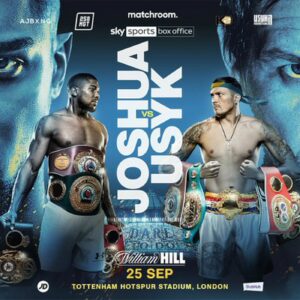 Anthony Joshua and Oleksandr Usyk will star in a match of reserved predictions for the World Boxing Association (WBA) Heavyweight Super Championship and the BF and WBO belts on September 25th at Tottenham Hotspur Stadium, in Tottenham, London.

Matchroom announced the Briton’s next defense, monarch of the pioneer body, who will return to the ring after his last fight in December when he defeated veteran Kubrat Pulev.

Joshua, 31, had planned to unify all belts against Tyson Fury this year but due to legal provisions, Fury will have to fulfill another rematch against Deontay Wilder, which brought down the long-awaited fight.

But this is one of the cases where option B is just as good as option A, as the other available rival was the Ukrainian Usyk. The southpaw fighter is one of the best pound for pound boxers today and won everything at Cruiserweight, a category in which he was undisputed champion.

In 2019 he went up to the heavyweight category and has already obtained two victories, which together with his record gave him the opportunity to challenge Joshua. At 34 years old he wants to take three belts with a victory and continue to write his story.

On this day: Usyk became the undisputed cruiserweight champion Michael Coffie: I’ve shown that I can put you down with any shot!