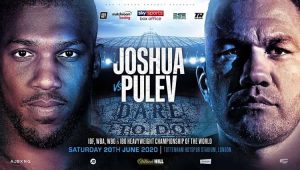 WBA, IBF and WBO heavyweight champion Joshua (23-1, 21 KOs) is finally set to fight mandatory challenger Kubrat Pulev (28-1, 14KO’s) in December. This is the delayed defence that was originally slated for earlier this year but delayed due to the COVID-19 outbreak. Exact date and venue to be decided.

With Joshua expectedly to handle Pulev with ease, this will pave the way for the fight the whole boxing world wishes to see…..against Tyson Fury. This is expected to happen in summer 2021 with Fury contracuatlly assigned to the thrid instalment against Deontay Wilder. Lets just hope that both Joshua and Fury win their respective upcoming fights.

“We know AJ’s only going to fight once this year, so we want to give ourselves the best opportunity to bring in a crowd, and that would obviously be the later the better,” Hearn told ESPN. “But it’s still not a gimme at all. There’s still a very strong chance that AJ will have to fight behind closed doors.”

“Bearing in mind he’s only going to fight once this year, I just feel as we might as well give ourselves every chance to have a crowd and that will be the first weekend of December,” added Hearn, who also noted that the O2 Arena in London would be the preferred venue if the country’s regulations allow them the opportunity.

“He must box this year, and obviously it’s up to me to find a solution and a crowd,” Hearn said of Joshua. “But he also knows at the same time, he must fight because it will be a year in December since the Ruiz fight.”

“He’s still improving, he’s still learning, and he’s not prepared to just sit out and not fight.”