Anthony Joshua vs. Oleksandr Usyk tickets sell out within 24 hours 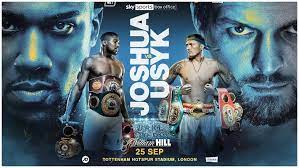 Tickets for Anthony Joshua’s IBF, WBA, WBO and IBO Heavyweight World Title defence against Oleksandr Usyk at Tottenham Hotspur Stadium in London on Saturday September 25 have sold out within the first 24 hours of going on sale.

‘AJ’ has sold-out stadiums and arenas around the world and now the Heavyweight division’s biggest attraction returns to the Capital for his fifth stadium fight at the sensational, state of the art home of Tottenham Hotspur F.C.

Over 100,000 fans waited in the StubHub ticket queue for their chance to land seats for the biggest Heavyweight clash of the year starring two London 2012 Olympic gold medallists going head-to-head in their quests for Undisputed supremacy.

Joshua (24-1, 22 KOs) dominated and then floored IBF Mandatory Challenger Kubrat Pulev to score a brutal ninth-round knockout at The SSE Arena, Wembley last time out in December in what was his first fight on UK soil since he stopped Alexander Povetkin in seven explosive rounds at Wembley Stadium back in September 2018.

Ukrainian pound-for-pound star Usyk (18-0, 13 KOs) made the move to the Heavyweight division after dominating at Cruiserweight, ending his extraordinary spell at 200lbs as the Undisputed king with a phenomenal run of victories in his opponent’s backyard against Marco Huck, Mairis Briedis, Murat Gassiev and Tony Bellew.

The 2012 Olympic Gold medallist began his assault on the Heavyweight division by retiring Chazz Witherspoon in seven rounds at the Wintrust Arena in Chicago in October 2019 and continued his bid to become a two-weight World Champion when he outpointed Derek Chisora over 12 rounds at The SSE Arena, Wembley last October.

Undercard details will be announced in due course.