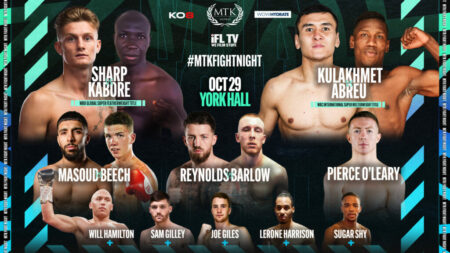 The action-packed card next month will be broadcast live in the US on ESPN+ in association with Top Rank and worldwide on IFL TV, and will also feature a number of talented rising stars.

Sharp (20-0, 9 KOs) is back following his victory over Diego Andrade Chavez in July, as the WBO’s #2 ranked fighter looks to move one step closer to a world title shot.

Standing in his way is Kabore (28-4, 7 KOs), who has previously gone the distance with former world champion Rey Vargas, and held the WBC International super-bantamweight title.

Kulakhmet has risen through the ranks at a rapid speed since making his debut last year, but now jumps up in competition once again to meet Abreu, who has faced Jaron Ennis and Egidijus Kavaliauskas in his career.

MTK Global Promoter Lee Eaton said: “We’re delighted to be back with a bang with yet another stacked MTK Fight Night in October. Over the past year it’s been clear that we pride ourselves on making competitive cards full of 50-50 fights, and that will be the same again for this show.

“It’s a great privilege to have Archie Sharp headlining the event in what will be a tough test against Alexis Boureima Kabore. Archie has world title ambitions, and this fight gives him the chance to show everybody that he belongs at that level.

“We have some of the very best undefeated rising stars in action too, including Tursynbay Kulakhmet, Shabaz Masoud and Pierce O’Leary, plus two undefeated fighters putting it all on the line early in their careers as Jordan Reynolds faces Randal Barlow.

“Sam Gilley, William Hamilton, Joe Giles, Sugar Shy and Lerone Harrison are on the bill too, with the remaining opponents for those fights set to be announced shortly, so this looks certain to be yet another can’t miss MTK Fight Night event.”