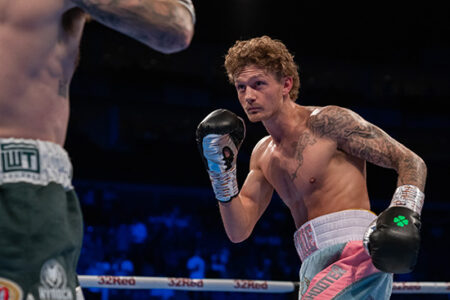 Archie Sharp is hoping to move a step closer to a world title showdown with new WBO super-featherweight champion Shakur Stevenson – provided he can defeat Alexis Boureima Kabore when they collide on Friday’s #MTKFightNight.

This week’s action-packed card at York Hall in London will be broadcast live in the US on ESPN+ in association with Top Rank and worldwide on IFL TV, and is headlined by the WBO Global super-featherweight title fight between Sharp (20-0, 9 KOs) and Kabore (28-4, 7 KOs).

Sharp is #2 in the WBO rankings, putting him on the cusp of a potential clash with Stevenson, who won the WBO super-featherweight title win a victory over Jamel Herring this past weekend. With that in mind, Sharp is determined to secure a battle with the new champion in the near future.

He said: “I know that with my skills and my ability, I can showcase an unbelievable performance and beat Shakur Stevenson. I haven’t peaked yet, I’m only 26-years-old. From now until I’m 30, I’ll be in my prime. I’ve had 20 fights, and they say it’s 20 for learning and 20 for earning.

“Shakur boxed well against Herring. He was very sharp and looked strong. I think Herring’s age showed. When he boxed Frampton they were both towards the end, but when he was in with a young, hungry fighter, it showed from the first jab thrown.

“Herring was always a second behind Shakur. He was a bit older and slower so I feel that helped Shakur look even better than he was. I was definitely impressed with Shakur’s performance though, so you can’t take that away from him. He got the job done.

“When you have young fighters like myself and Shakur, the speed and youth is the difference. I’ve been learning over time and I’m hitting my peak now. The fans are going to see a completely different Archie Sharp when I fight on Friday.

“I’m headlining my first show, and I’m grateful to MTK Global and the support I’ve had for getting me in this position. I’m looking forward to staying active and keeping the momentum going. That’s definitely key to my success.

“I had a year out of the ring before my last fight due to injuries and various other things, so now I’m blessed to be back out as I look to keep the sharpness.

“I’ve had a look at Kabore and I’m expecting him to bring a well-schooled performance. He went the distance with Rey Vargas who was an unbeaten world champion, so he’s been in the ring with some high-calibre fighters and will be tough.

“I think he’ll look to get behind the jab, which is perfect for me as I want to be in the ring with someone who has skill, as it will allow me to really showcase mine.”