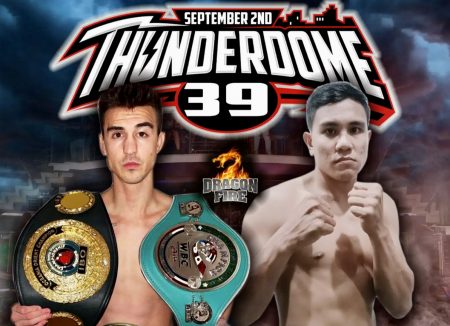 Arnel Baconaje will gun for his second straight win as he takes on Aussie prospect “Action” Jackson England on Sept. 2, 2022 in Australia.

Baconaje beat journeyman Leonardo Doronio last March 12 in Parañaque City. He will be gunning for his first win overseas after losing to Yasutaka Ishimoto in Japan, Lingjie Xia in China and Ivan Kozlovsky in Russia.

The 24-year-old England is looking to bounce back after suffering a unanimous decision defeat at the hands of unbeaten Paul Fleming on March 23, 2022 in Sydney. The 28-year-old Baconaje is 15-5 with 11 knockouts, while England is 13-2 with eight knockouts.

Ladrada is looking for his second straight win after beating Jason Buenaobra by unanimous decision in his last fight on Dec. 4 in Parañaque City.

This will be Labrada’s biggest fight to date and his first international fight.

Coolwell, a former Australian champion, wants to return to his winning ways after losing to Ender Luces in an International Boxing Federation Youth super featherweight fight last April 13 in Queensland. The 23-year-old Coolwell’s other loss is also via a split decision Jake Wyllie last year. The 25-year-old Ladrada is 11-2-1 with three knockouts, while Coolwell is 7-2 with five knockouts.