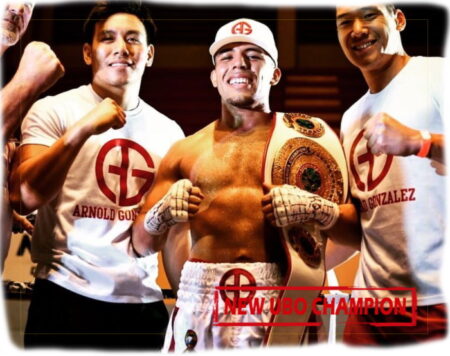 Arnold Gonzalez put a thick line under his potential, when he won the vacant Universal Boxing Organization™ (UBO) Inter-Continental and South America titles on Saturday night, November 20, in the city of Manta in his ancestral home-country Ecuador.

Gonzalez started the fight imposing his strength, forcing Prieto on the back foot. He boxed nicely to open up his opponent, mixing in hurtful punches to body and head, while Prieto used his experience, blocking many of the shots and attempting to counter off the ropes.

Four rounds went by with much of the same, Gonzalez going forward and Prieto remaining defensive but dangerous in spurts. But when round five was about to start, Prieto claimed injury and disappointingly retired on his stool.

Prieto, who earlier this year showed he still has something to offer when he beat former Colombian champion Yuri Mendez, drops to 28-11 (18).

The fight was aired live nationally on Ecuador TV, and internationally via Facebook.