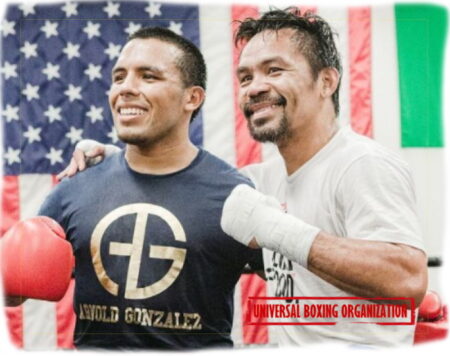 Even before he made his professional debut, Ecuadorian-American Arnold Gonzalez (26) was a lead sparring partner for one of the greatest fighters of all time, eight division world champion and Filipino icon Manny Pacquiao.

On November 20, Gonzalez, now 8-0 (4), will attempt to win his first pro championship, the Universal Boxing Organization™ (UBO) South America Welterweight title, when he squares off with Colombian Jose Luis Prieto, 28-10 (18), in Manta, Ecuador.

While still an amateur Gonzalez travelled to Los Angeles in 2018, and started working out at the famous Wild Card Gym. When Paquiao, also training there, was preparing to fight Adrien Broner, Gonzalez offered his services for sparring, and did so well that he was asked to be a regular on the team.

He also helped Pacquiao get ready for his fights with Keith Thurman and Yordenis Ugas, and the many rounds of sparring, hours of road-work and invaluable advice from a living legend, has possibly helped Gonzalez progress as a fighter more than anything else.

But Gonzalez doesn’t just want to emulate Pacquiao in the gym. His plan is to build a huge fan-base in his ancestral homeland, just like “The Pacman” has done in the Philippines, and eventually push Ecuadorian boxing to new heights.

The fight against Prieto will be his fifth straight outing in Ecuador, and another step towards reaching his goal of one day becoming a world champion.

If successful, he would be only the second Ecuadorian world champion in history, following current IBO Super Middleweight ruler Carlos Gongora.

Gonzalez has all the tools to be a major star in Ecuador, but first he will have to get past the much more experienced Prieto and win the UBO South America crown.

Promoted by Capital Box, the fight will be televised live by Ecuador TV and streamed world-wide via Facebook.