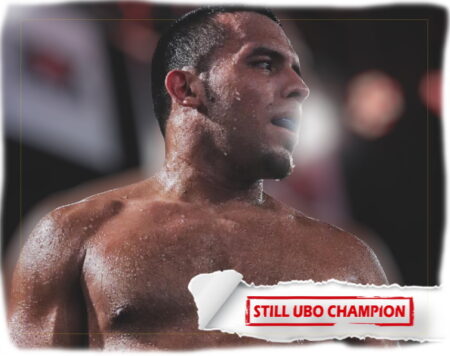 Gonzalez (27) successfully defended his title for the first time on Saturday night, December 17, in Quito, Ecuador, the birth-country of his parents.

In the main event of a show at the Arena Telesucesos, New Yorker Gonzalez scored a fourth round technical knockout of Peruvian Jesus “El Rayo” Bravo to remain UBO champion.

After a slow first round, things got more heated from the second round, with punches landed by both men. Towards the end of round two, and all of round three, Gonzalez was really effective with hard body-shots, and it clearly took its toll on Bravo.

In the fourth round, the body shots appeared to break Bravo completely and he spit out his mouth-piece and declared that he was not able to continue.

Gonzalez also won the UBO title in Ecuador, when he stopped Colombian Jose Luis Prieto in November of last year.

A former regular gym-mate and sparring-partner of the legendary Manny Pacquiao, Gonzalez took his unblemished record to 11-0 (6).

The fight was promoted by Capital Box, and broadcast live on Pay-er-View via meet2go.co