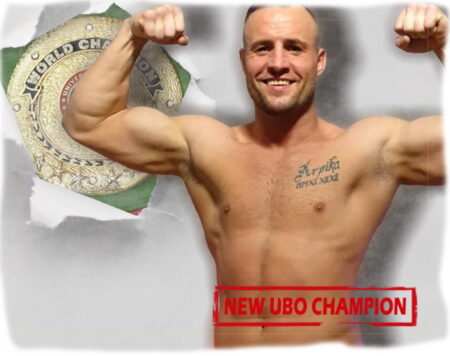 At the Ferenc Kellner Sports Hall in Budapest, Klasz was in with a tough and gritty foe, but prevailed despite facing some serious adversity along the way.

Klasz was the sharper man from the start, while Khamitski was looking to use his superior experience to unsettle the home man. Unfortunately the ring was very slippery, and both boxers slipped to the canvas numerous times making it quite messy.

In the second round, Klasz hurt his right hand badly, later revealed to be broken, but he bravely fought through the pain and continued to outland the battle-tested Khamitski.

Most rounds looked the same, with Klasz controlling the fight but Khamitski doing his best to turn the tide, and both boxers having a hard time staying on their feet due to the wet and slippery ring.

In round ten the supervisor had seen enough, and decided it was not safe to continue. The fight went to a technical decision, with Klasz winning unanimously 99-91 (Bence Kovacs), 100-90 (Bulcsu Gabris) and 100-90 (Tamas Sasvari).

“Thunder Man” Klasz, who won the UBO International title almost two years ago, is now 12-0 (10). Khamitski falls to 32-22-3, having fought some of the best in the world at Middleweight and Super Middleweight.

The fight headlined a show promoted by Toto Box-Promotion.