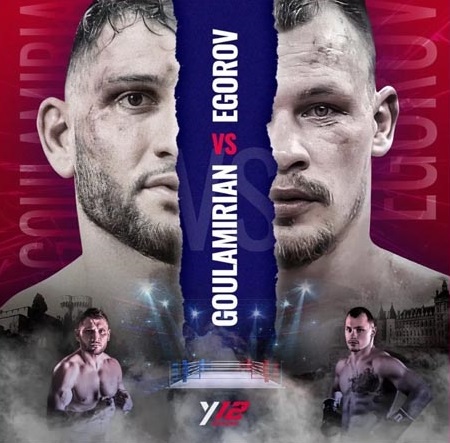 A native Armenian, Goulamirian (26-0, 18 KOs) will be making the second defense of his super championship against Russia’s Egorov (11-0, 7 KOs) in the 12-round main event of a night of world-class championship boxing, presented by Y12 Boxing Promotions.

The pair had been scheduled to fight last December, however, the defending champion tested positive for Covid and the fight was postponed. Thankfully Goulamirian recovered.

The 35-year-old Goulamirian has been preparing for the bout in Big Bear, California, under the watchful eye of well-known trainer Abel Sanchez. He won the Interim title in the 2018, the WBA Gold World belt later that year and was upgraded to the Super champion in 2019. Goulamirian has since made successful defenses against Kane Watts (KO 4), and Constantin Bejenaru (RTD 9).

Inactive himself since 2020, 31-year-old Egorov is a former Russian amateur champion. In his nearly six-year career, he has already beaten respectable contenders including Lateef Kayode (RTD 6), Tommy Oosthuizen (UD 10) and Roman Golovashchenko (TKO 3).

On the stacked undercard, hard-punching EBU European Super Middleweight Champion, Kevin “The Phenomenon” Lele Sadjo (18-0, 16 KOs) from Saint-Maur, Val-de-Marne, France, will make the first defense of his title in a 12-round battle against mandatory challenger, Emre Cukur (19-1-1, 3 KOs) of Munich, Bayern, Germany, in the co-main event.

Also scheduled is a 12-round battle for the vacant EBU European Super Welterweight Championship between undefeated 23-year-old Milan “Natsuko” Prat (17-0, 14 KOs) of Drancy, Seine-Saint-Denis, France, and IBF #9-ranked Abass Baraou (12-1, 8 KOs) of Berlin, Germany, as well as an appearance by 2016 Olympic Silver medalist and amateur boxing star, “Virtuoso” Sofiane Oumiha looking for his third consecutive professional victory against an opponent that is TBA.

“This is the most significant event in France in decades. The best domestic fighters are fighting in career defining fights versus their mandatory challengers,” said Yohan Zaoui, Chairman of Y12 Boxing. “France must once again establish its place among one of the best nations in boxing and this event is a step in that direction. On November 19, boxing fans from around the world will see the reemergence of boxing in this great nation.”