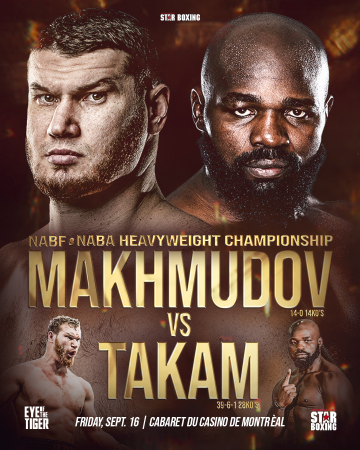 Most recently in July of 2021, Takam traveled to the UK to face hometown favorite,, former Olympian, and current #1 (WBO), #2 (WBC), #5 (IBF), #8 (The Ring) world rated, Joe Joyce (12-0 12KO’s). Takam gave Joyce all he could handle before an extremely controversial 6th round stoppage. At the time of the stoppage Takam was winning on all three judges’ scorecards. Takam is a former world title contender, IBF Inter-Continental, WBC Silver and WBF World Champion, who is set to take on the heavy-handed Makhmudov, hoping to prove he has enough left in the tank to position himself for one more heavyweight world championship challenge.

Takam had this to say about the fight: “I’m excited about the opportunity to fight in Montreal once again.  Canada is great to visit, and the fans know their boxing. I’m healthy, in shape and ready to give my fans around the world what they have been asking for.  It’s time to get back in action and achieve my goals.”

Makhmudov stands at a staggering 6’5”, typically weighing in north of 260 lbs., has never gone beyond the 7th round of a fight, knocking out all of those that have attempted to challenge him. Makhmudov looks to defend his NABF title for the seventh straight time. Makhmudov who’s most recent victory was over Mariusz Wach by 6th round KO, endeavors to level up once again by adding a name with the merit and experience of Carlos Takam to his resume.

“Carlos is a true veteran and is always willing to push himself to fight the best,” said Star Boxing CEO, JOE DEGUARDIA. “Whether its world champions like Anthony Joshua on eight days’ notice, top contenders like Joe Joyce in Joyce’s backyard in the UK, or now, a powerful rising prospect in Makhmudov, Takam always seeks the biggest fights and puts on entertaining performances for the fans. We expect the same thing come September 16.”

Makhmudov-Takam is promoted by Eye of the Tiger Management and Joe DeGuardia’s Star Boxing.