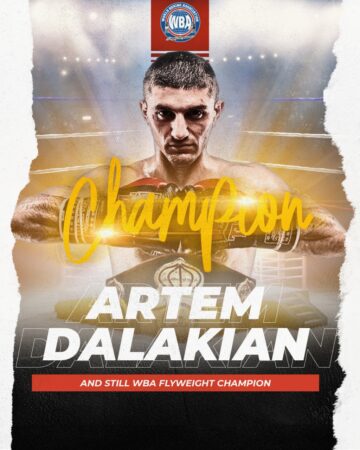 Artem Dalakian came back in style and knocked out Luis Concepcion in the ninth round to retain his World Boxing Association (WBA) flyweight championship for the fifth time on Saturday at the Akko International Arena in Kiev, Ukraine.

The Azerbaijani-born Ukrainian made a perfect fight against his mandatory opponent and proved that he is still at the top of the 112-pound class despite the time he had been out of action.

Different situations, including the pandemic, had not allowed Dalakian to fight since last year but inactivity was not a problem for the champion.

The 34-year-old fighter walked the ring, used the distance very well and annulled the Panamanian, who was quite aggressive and eager to snatch the crown but fell short.

Dalakian’s patience in the first rounds allowed him to find the way to hurt “Nica” and the key point was in the fifth round when he connected a combination that ended with a left hook and sent the Central American to the canvas. Concepcion got up but was knocked down again by the champion and although he recovered again, from that moment on the fight was tilted to one side.

With surprising attacks and good speed, Dalakian worked very comfortably and in the ninth he sent the Panamanian to the canvas again. Concepcion got up quite hurt and the Ukrainian jumped on him to force the corner to ask the referee for a stoppage.

Dalakian remained undefeated in 21 fights, 15 of them won by knockout, while Concepcion dropped his record to 39 wins, 9 losses and 28 knockouts.