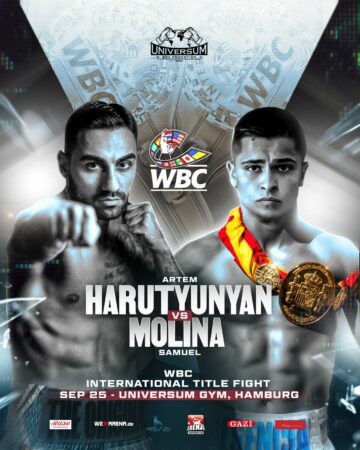 Undefeated German Artem Harutyunyan will face also undefeated Spanish Samuel Molina, in a clash in with the vacant International Lightweight title of the World Boxing Council at stake.

This fight will be the main event this Saturday night, at the Universum Gymnasium, in Hamburg, Germany.

Harutyunyan represented Germany at the Rio Olympics and previously at the Minsk European Championships, winning the bronze medal both times. Born in Yerevan, Armenia, Harutyunyan immigrated to Hamburg at a young age and went on to represent his adoptive nation during a highly distinguished amateur career.

Harutyunyan currently has a 10-0 record, with 6 knockouts. In his last fight last April, he struggled to beat Vladyslav Melnyk by split decision, but he is an experienced boxer who aims to improve his position in the world rankings.

Molina is an undefeated Spanish fighter with a 16-0 record, with 7 knockouts. Molina had planned to fight at home, but his promoter, Queensberry Promotions, proposed that he would fight December. For that reason, he decided to accept this offer to fight in Germany, and to pursue a major WBC title.

In May, Molina defeated Viorel Simion on points, and now he will seek to achieve another victory, against an exacting rival. The fight is hosted by Universum Promotion and will be televised on BILD +.