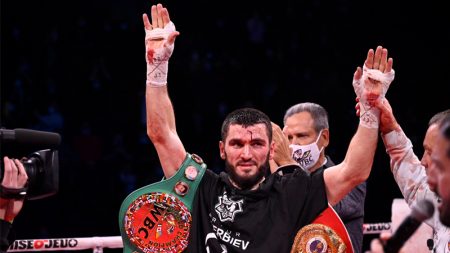 A badly bloodied WBC light heavyweight champion Artur Beterbiev KO`d Marcus Browne in the ninth round, with a left to the liver at the Bell Center in Montreal, overcoming a horrendous gash to his forehead, which bled profusely, after an accidental clash of heads in the fourth, to make it seventeen out of seventeen KO`s in his stunning pro career.

The crack of heads in the fourth round left Artur with a slice on his forehead not far short of half a sabre blade length. It was examined by the Ring Doctor who allowed the fight to continue. In spite of constant efforts of his cornermen, who draped his face with a towel and pressed down hard, for the full minute of respite between rounds, such was its depth, that the blood flow couldn’t be staunched or stemmed and Artur`s face became a crimson mask of blood. Some of it found its way on to Marcus who`d also suffered a cut but it was smaller and less severe.

Marcus had won the first two rounds, maintaining distance, moving laterally, using his long right southpaw jab and boxing smartly. Artur who was in constant pursuit, was initially tentative, but then started cutting down the distance and opening up in the third.

After the cut, both fully realized what was at stake and the tempo reached red hot. Artur slammed in two handed combinations and Marcus responded in unkind/kind. Before the beginning of round five, Referee Mike Griffen, who`s pale blue shirt cuffs were flecked with splashes of blood, paused the action for Marcus` corner to wipe globs of grease off his face. Marcus was landing accurate right jabs, but just before the bell, Artur landed a venomous, ominous combination to his head.

The turning point came in the seventh round, when Artur landed a left hook to Marcus` liver and a right to the head, which dropped him to the canvass. After Marcus bravely got up, he then launched a blistering attack, but then the bell rang.

In the eighth, Marcus regrouped, landing a hard right to Artur`s sliced head and then some precise combinations, while staying mobile and evasive until a hard straight right from Artur visibly hurt him.

In the ninth, Artur launched a left right combination to the head, another sinking left to the liver and a left uppercut. Marcus went down again and wasn`t able to beat the count. It ended at forty-six seconds.

WBC Vice president Alberto Leon presented a delighted Artur with his Green and Gold Belt. He also retained his IBF Belt. Artur who went over to Marcus, with both showing sportsmanship, modestly said: “This was another experience in my career.” When asked what`s next, he jauntily replied: “A night of good sleep?”