Artur Beterbiev vs. Marcus Browne on Dec. 17 to be held in Montreal 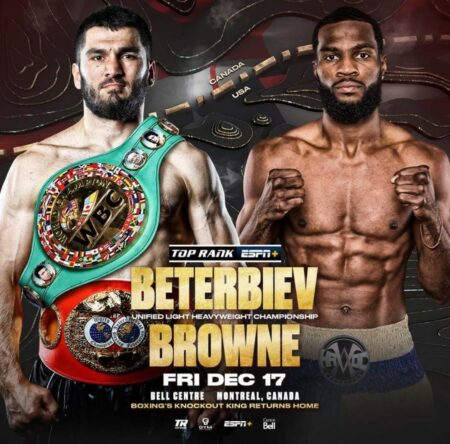 WBC/IBF unified light heavyweight world champion Artur Beterbiev moved to Montreal nearly a decade ago to embark on his professional journey following a pair of Olympics for his native Russia.

Sixteen fights into his career, he will return to his adopted hometown for the first time as a world champion.

Beterbiev, boxing’s only world champion with a 100 percent knockout rate, will defend his world titles against WBC No. 1 contender and 2012 U.S. Olympian Marcus Browne on Friday Dec. 17 at the Bell Centre in Montreal.

Beterbiev-Browne will headline a loaded world title tripleheader streaming live and exclusively in the United States on ESPN+.

Promoted by Top Rank and Groupe Yvon Michel (GYM), tickets go on sale Saturday, Oct. 23 at 10 a.m. ET and can be purchased by visiting ticketmaster.ca, or emailing GYM’s office directly at info@groupeyvonmichel.ca.

Beterbiev (16-0, 16 KOs) last fought in Canada in December 2016, a first-round stoppage over Isidro Ranoni Prieto. He won the vacant IBF world title in his next fight, which he defended two times before unifying titles with a devastating 10th-round stoppage over longtime WBC king Oleksandr Gvozdyk.

After a nearly 18-month absence, Beterbiev returned in March with a 10th-round TKO over Adam Deines in Moscow. Browne (24-1, 16 KOs), a 30-year-old native of Staten Island, New York, defeated via unanimous decision win over two-weight world champion Badou Jack. After dropping a technical decision to Jean Pascal in August 2019, Browne returned to his winning ways April 20 with a shutout decision over Denis Grachev.