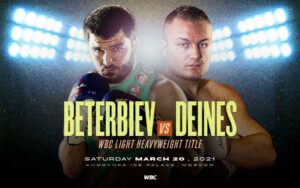 Southpaw Adam, who`s no slouch himself (19-1-1, 10 KO`s) will need the power of Thor to thaw the permafrost resistance and avalanche crescendo power of Artur, at the Khodynka Ice Palace in Moscow.

It`s proved hard work, with plenty of twists and turns to finally secure this match.  Artur was scheduled to fight China`s Meng Fanlong in March 2020, but the Pandemic meant it was re-scheduled for October.

Unfortunately Fanlong was unable to secure a visa, so Adam Deines stepped in. Then Artur suffered a rib injury in training, so it was rescheduled for January. As bad luck would have it, Artur tested positive for Covid, but has recovered, so here we are with crossed fingers, hoping the Ides of March will gives them a chance to show their bewares.

Adam, who joined the pro ranks in 2015, has lost a decision to Fanlong in 2019, but has had two wins since then. In 2016, he drew with Karel Horejsek but defeated him via UD in his very next fight.

Artur, who had a stellar amateur record, including winning Gold in the European and the World Championships turned pro in 2013. Since then he`s blotched and  notched some quality names on his record including Callum Johnson, Tavoris Cloud, Gabriel Campello and Jeff Page.  Page and Johnson put Artur down on to the canvass, but only briefly, because he got up and blasted them out.  He`s never adverse to a tear up!

His biggest win so far was in gaining the WBC Green and Gold Belt from Oleksandr Gvozdyk via a tenth round TKO in a veritable slugfest. Up to that point, Oleksandr was undefeated, but that all changed with a mighty thud.

Artur can be knocked down, but no one has made it stick.  While Adam has just turned thirty, Artur is six years older. Even though different boxers, mature at different rates, and reach their peaks at different stages, obviously time isn`t on Artur`s side.  Like all of us, he isn`t getting any younger! Yet, there`s currently no suggestion whatsoever, that he`s slipping or on the slide.  The slope still inclines upward to the summit, where he`s firmly perched.

How much has Covid 19 affected Artur? Was it a light brush, or a veritable scourge?  Artur and his Work Team insist that he`s fully recovered and he`s fighting fight.

Going up against an undefeated fighter who`s a WBC champion is one thing. Swopping punches with a fearsome fighter, with thunder and lightning proven devastating power, is even more.  A challenge to face and ordeal to overcome?

Adam can go in there and try to execute his favorite left hook in a furious give and take slugfest from the very word go, or try to stave off the attack and effectively as well as intelligently counter.  With Artur`s pressure fighting,  he won`t get that much breathing space or an abundance of time, for this sort of measured timing.

It`s most unlikely this one will go the distance, so whoever`s fist connects first, hardest and most effectively, will walk away from this high noon shootout. A draw isn`t on the cards, so to the victor the spoils!

Full marks to Adam for chancing his hand against boxing`s current most fearsome puncher, who`s looking plus aiming for a short night`s work. Surviving this firestorm isn`t going to be at all easy. Whatever Adam`s being paid, he`s certainly going to earn his corn, and need all his skills to avoid being forlorn.

Adam himself has power in both hands. He`s fond of throwing hooks and has good defense. He`ll definitely need all of this.  While Artur ruthlessly surges forward throwing punches from all angles, never, ever relenting. Often as not, softening up his opponents via a blistering body onslaught.

Both men were born in Russia. Artur now resides in Montreal, Canada and Adam in Magdeburg, Germany. As the Beatles sing: “Let me hear you balalaikas ringing out.” Or the strains of Matt Monroe`s magnificent and unforgettable: “From Russia with Love!” Important to note that the next steppe is… up to them.