Artur Mann: I do this for myself and my beliefs, not for belts, not for money 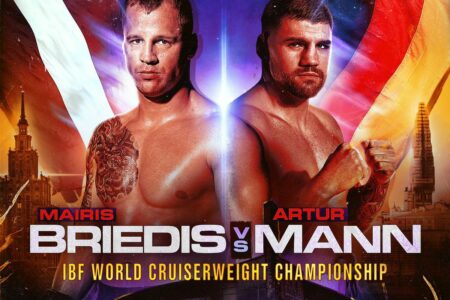 Artur Mann (17-1, 9 KOs) insists he will not be intimidated by Mairis Briedis’ (27-1, 19 KOs) fervent home support as he looks to dethrone the Latvian boxing king on October 16 and bring the IBF and Ring Magazine World Cruiserweight Titles back to Germany.

Briedis has turned the Arena Riga into his hometown fortress with thousands of Latvian fans filling the ice hockey stadium each time he fights. Like Briedis’ previous opponents, Mann can expect a cold reception when he enters the ring, but despite being away from home and up against the world’s number one Cruiserweight, the former WBO International Champion and IBO World Title Challenger is confident of upsetting the local hero and bringing home the belts.

“It’s really exciting to know that there are going to be thousands of people in the arena to watch the fight,” says Mann. “It doesn’t matter if they are going to be booing me. Anyone who has ever stood in the ring knows that after the bell rings there is nothing except you and the fighter in front of you. It doesn’t matter where I’m fighting. I just concentrate on myself and my game plan.

“I do this for myself and my beliefs, not for belts, not for money. I do this to prove to myself and to my five-year-old son that I can achieve anything. I learnt a lot from my World Title fight with Kevin Lerena and now I’m 100% pumped and ready to show the world what I can do on October 16.”

Mairis Briedis defends his IBF and Ring Magazine World Cruiserweight Titles against Artur Mann on October 16 at the Arena Riga in Latvia. Tickets are on sale now and available to purchase via https://www.bilesuserviss.lv.