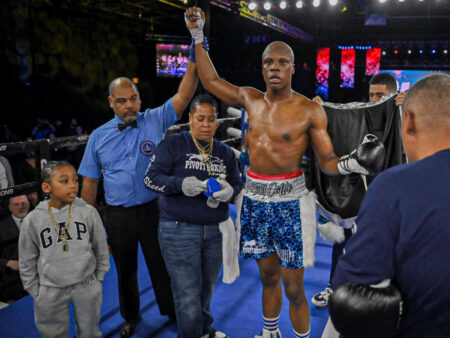 2300 Arena, Philadelphia, USA – 20 November 2021
Atif Oberlton stopped Brent Oren in round two of a scheduled six-round light heavyweight bout in front of a large audience at the 2300 Arena.

The seven bout card was promoted by King’s Promotions.

Oberlton was patient early as landed some power punches. At the end of round one, Oberlton landed a hard left hand the bel.. That was a precursor of things to come as in round two, Oberlton ramped up the offense and dropped Oren twice. The second knockdown hurt Oren and the fight was stopped at 1:38.

Oberlton of Philadelphia was making his hometown debut and the heralded prospect is 4-0 with four knockouts. Oren of Harrisburg, PA is 4-7.

Albright of Philadelphia is 4-0 with four knockouts. Hernandez of Kent, WA. is 7-2.

In the opening seconds, Bernadin dropped Torres with a hard left hand. He was all over Torres and landed a hard flurry of punches and the bout was stopped.

Jonathan Rodriguez and Roberto Pucheta battled to a six-round draw in a bantamweight contest.

Johnson of Philadelphia took two cards by 39-37 tallies, while Abarca won a card 39-37.

Julian Gonzalez stopped Tyriek Gainey in round one of their scheduled four-round junior lightweight bout.

Gonzalez dropped Gainey with a hard right hand. Gonzalez landed a flurry of punches that hurt Gainey on the ropes and the fight was stopped at 2:06.

Gainey of Reading, PA is 5-0 with five knockouts. Gainey of Paterson, NJ is 0-2.

Devon Young remained undefeated with a four-round unanimous decision over Nicoy Clarke in a heavyweight bout.

Young pounded away at a game Clarke and won by scores of 40-36 cards.