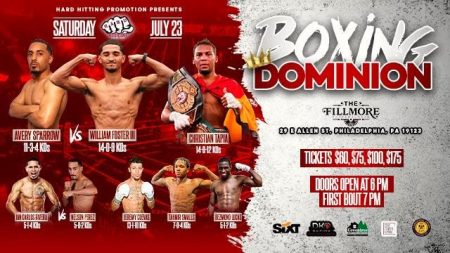 The fantastic 11-bout card is promoted by Hard Hitting Promotions.

Foster of New Haven, Connecticut is 14-0 with nine knockouts. The 28 year-old is a seven year professional who has wins over Suliman Segawa (10-0), Angel Suarez (8-2), Jahmal Dyer (9-2), Philly-Favorite Donald Smith (10-0). In his last bout, Foster took an eight-round split decision over Edwin De Los Santos (13-0) on January 7th in Orlando, Florida. The bout was part of a ShoBox: The New Generation card.

In the co-feature, Undefeated WBA-NABA Super Featherweight and WBC Continental Americas champion Christian Tapia takes on undefeated Fernando Romero in a 10-round bout.

Tapia of Coamo, Puerto Rico has a record of 14-0 with 12 knockouts. The 28 year-old is a five-year veteran. He won the WBA-NABA title with a second round stoppage over Mason Menard (36-5). He then stopped Iron Alvarez (14-0) in 10-rounds. In his last bout, Tapia won a 10-round unanimous decision over Luis Lebron (18-2-1) to capture the WBC Continental Americas title on March 12th in Philadelphia.

Romero of Puebla, Mexico is 11-0 with 10 knockouts. The 22 year-old Romero is a four-year professional and is coming off a first round stoppage over Victor Valencia Diaz on October 16, 2021 in Mexico. This will be the United States debut for Romero as all of his fights have been in Mexico.

Jeremy Cuevas (13-1, 10 KOs) of Philadelphia takes on an opponent to be announced in a lightweight bout.

Carlos Ramos (15-2. 10 KOs) of Madrid, Spain takes on an opponent to be named in a super featherweight fight.

Tahmir Smalls (8-0, 5 KOs) of Philadelphia will fight an opponent to be named in a welterweight fight.

David Garcia (3-0, 1 KO) of Crescent City, Florida will take on an opponent to be named in a heavyweight bout.

Carlos Rosario (3-0, 2 KOs) of Winter Haven, Florida takes on an opponent to be named in a lightweight fight.

Chris Echevarria (0-1) of Aguada, Puerto Rico fights an opponent to be named in a bantamweight fight

Juan Davilla of Philadelphia makes his pro debut against an opponent to be named in a lightweight bout.

Tickets are now on sale for $60, $75, $100 and $175 and can be purchased at The Fillmore Philadelphia, www.filmorephilly.com Hard Hitting Promotions Social Media and Ticketmaster.com