Azat Usenaliev Once Again A Medalist At The Asian Boxing Championships 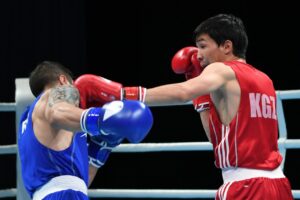 The second part of the quarter-finals with 24 bouts was held on the third competition day at the ASBC Asian Men’s & Women’s Elite Boxing Championships in Dubai, the United Arab Emirates where the winners are now guaranteed medallists. Kyrgyzstan’s former ASBC Asian Champion Azat Usenaliev is a medalist at the competition once again following his impressive performance in the quarter-finals.

Kyrgyzstan’s Azat Usenaliev is on the podium again

Kyrgyzstan’s Azat Usenaliev was ASBC Asian Champion in the 2013 Amman edition and won dozens of international tournaments on several continents during his boxing career. The 29-year-old flyweight (52kg) boxer won more than 90% of his international bouts in the recent four years and arrived in Dubai to achieve another medal.

The Kyrgyz boxer was untouchable for Iran’s experienced Omid Ahmadisafa in the first round and he could still increase his amazing rhythm in the second. The Romanian referee counted the Iranian in the third round when Usenaliev had clear dominancy and landed strong punches from longer range. The Kyrgyz No.1 won the contest by a large margin and will be meeting with Uzbekistan’s Olympic Champion and AIBA World Champion Shakhobidin Zoirov. Usenaliev defeated the Uzbek in the final of the 2013 ASBC Asian Elite Boxing Championships and the neighbouring boxers’ re-match will be the next anticipated contest of the weight category.

“My coaches told me that I was very good in my quarter-final today. We had the strategy against the Iranian and I believe it worked well in the contest. I was trying to be the first in the attacks and kept my focus in the bout until the last seconds. I am now a medalist, my next opponent will be Uzbekistan’s Shakhobidin Zoirov and we knew each other very well from many previous events,” commented his success Kyrgyzstan’s Azat Usenaliev.”

An amazing contest, Tsendbaatar vs. Khalakov will be held in the semi-finals of the lightweight (60kg)

Mongolia’s Erdenebat Tsendbaatar claimed the bronze medal in the featherweight (57kg) in the Ekaterinburg 2019 AIBA World Boxing Championships and he competes in Dubai in his favorite division, the lightweight (60kg). The defending Asian Games winner and ASBC Asian Champion from Mongolia had a competitive rival in the quarter-finals, Kyrgyzstan’s experienced Munarbek Seyitbek Uulu who had good punches but Tsendbaatar was quicker and stronger today.

Uzbekistan’s Abdumalik Khalakov is one of the top talents who won the Youth Olympic Games, the AIBA Youth World Boxing Championships and the ASBC Asian Youth Boxing Championships in 2018. The Uzbek lightweight (60kg) boxer was fantastic in the preparation events and he used not only his brilliant footwork against Tajikistan’s newly crowned National Champion Abdurakhmon Yokubov, but he landed also strong punches. The Tajik moved ahead but Khalakov’s counter-attacks were successful from all angles, therefore, the young Uzbek star will be meeting with Tsendbaatar in the semi-finals.

Philippines’ Ekaterinburg 2019 AIBA World Boxing Championships silver medalist Eumir Felix Marcial is one of the favorites in the men’s middleweight (75kg) and he walked over to the semi-finals in Dubai. Another silver medalist of the AIBA World Boxing Championships, Abilkhan Amankul had to work hard until the final gong against India’s Ashish Kumar who achieved silver at the Bangkok 2019 edition. The Kazakh star had excellent counter-punches in the second part of their tough contest and eliminated one of the top boxers of the weight class. Uzbekistan’s Saidjamshid Jafarov used his athletic skills to beat Kyrgyzstan’s Omurbek Bekzhigit Uulu while Iran’s Seyed Shahin Mousavi eliminated Tajikistan’s next-generation member, Abdumalik Boltayev in Dubai.

The first part of the semi-finals will be held on the fourth competition day at the ASBC Asian Elite Men’s and Women’s Boxing Championships. All of the women’s semi-finals are scheduled on Thursday when the bouts will be starting at the Grand Ballroom of the Le Meridien Hotel on 6pm.

AIBA сelebrates the opening of the Men’s World Boxing Championships