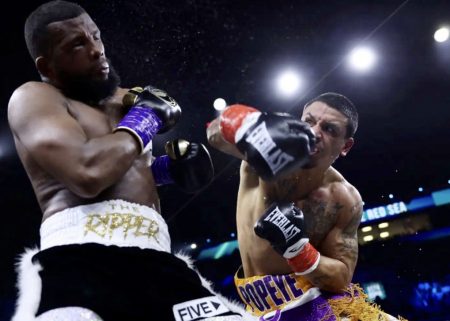 With his corncob pipe and sailors hat in tow, RICHIE “POPEYE THE SAILOR MAN” RIVERA went to battle with two time world champion BADOU JACK “THE RIPPER” on Saturday, in which Rivera was disgracefully denied what would have been a career defining victory.

Rivera, who came up in weight nearly 15 lbs for the opportunity was in control of the first half of the fight, finding a home for his uppercut. However, Rivera would fall victim to an inexcusable time keeper error in the 8th round. For the first and legal three minutes of the 8th round Rivera was in control using his work rate to impress. As the on screen clock counted down to 10 and disappeared, there was a noticeable lack of the 10 second warning. The round unimaginably continued on for an additional and illegal 58 more seconds, to Jack’s benefit, as he forced Rivera into the corner and landed a heavy left hand, followed by a barrage of punches. Rivera made it out of the inexplicable 4 minute round, with judges giving the 8th to Jack, thanks to the additional time. DAZN’s Chris Mannix remarked on the broadcast: “If I’m Richard Rivera, I’m upset. That four-minute round — a round that Jack did much of his damage in that final minute — may have cost him the fight.”

When the scores were read, Jack would get the nod by split decision (96-94 Rivera, 96-94 x2 Jack) with the 8th round and illegal additional time swinging the fight in Jack’s favor. A black cloud over an undoubtedly entertaining fight. Rivera’s career defining win was swept out from under him due to a lack of professionalism and complete failure of the time keeper.

“Richie was denied a victory and it’s absolutely inexcusable,” said Star Boxing CEO JOE DEGUARDIA. “It’s disgraceful that a round could go on for 4 minutes, with the illegal extra minute swinging the outcome of the round and the fight. How does something like that happen on a stage as big as this? We will be requesting a rematch and protesting the fight with the necessary commission. We are all extremely proud of ‘Popeye’ for daring to be great. Separately we nonetheless congratulate Saudi Arabia on a huge showcase boxing event.”