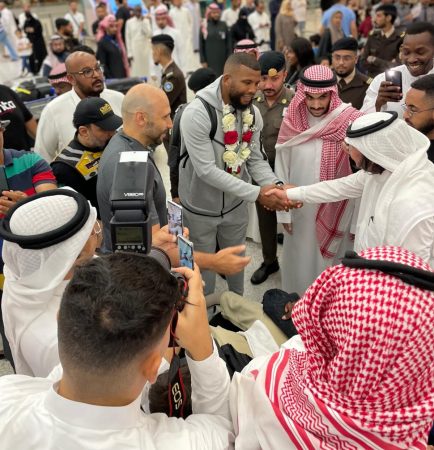 Two Division Boxing World Champion and “People’s Champion” Badou Jack (26-3-3, 16 KOs) touched down with his team in Jeddah, Saudi Arabia, Thursday night for his first fight in the Kingdom on the undercard of Oleksander Usyk vs. Anthony Joshua II, dubbed “Rage on the Red Sea”.

Jack was greeted by hundreds of fans who swarmed the airport hours prior to his arrival to get a glimpse and meet the former Super Middleweight and Light Heavyweight Champion. Several Saudi dignitaries, influencers, and members of the Royal Family were present at King Abdul Aziz International Airport to welcome the champion to the Kingdom.

“As we were waiting in the VIP Arrivals Lounge for Badou’s flight to land, airport security informed me there were more people awaiting Badou than any other fighter that arrived yet and it was becoming a security concern”, Jack’s Manager, Amer Abdallah stated. “He’s definitely the fan favorite here, a true Muslim hero and icon to so many in this region”.

“I was so surprised to see how many fans and supporters came to the airport to welcome me” Jack said. “I feel right at home here in Saudi Arabia and appreciate all of the love from everyone. I’m going to put on a great performance for my fans here on the 20th”.

In his previous two outings, both in the Middle East, Jack defeated Hany Atiyo by way of a 1st round knockout on the Floyd Mayweather vs Don Moore exhibition event in Abu Dhabi, then followed up by scoring a 2nd round stoppage against Samuel Crossed in Dubai. With a victory on August 20th, he has his sights set on capturing a 3rd division world title at Cruiserweight.