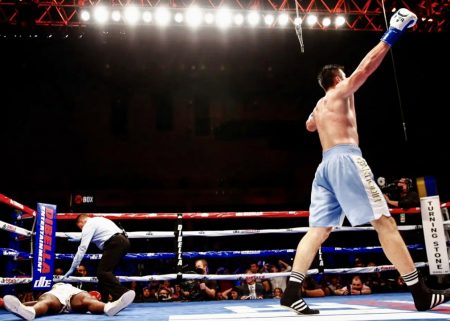 Undefeated heavyweight knockout artist Bakhodir Jalolov took his time on Friday night, but ultimately closed the show in dramatic fashion with an eighth-round knockout over Jack Mulowayi in the main event of a SHOBOX: The New Generation telecast at Turning Stone Resort Casino in Verona, N.Y. that helped kick off the International Boxing Hall of Fame Induction Weekend in nearby Canastota, N.Y.

Known as “Big Uzbek”, the 6-foot-7 Jalolov, a two-time Olympian and 2020 Gold Medalist from Uzbekistan, improved to a perfect 11-0 with 11 KOs when he landed a huge left hand that sent Mulowayi (11-3-1, 7 KOs) flat on his back in the eighth and final round.

“I’m feeling really good about the performance,” said the 27-year-old Jalolov. “The opponent was at a really good level and a great fighter. He was a really tough, durable guy. I landed some big shots on him and he can take a punch.”

In front of a who’s who of boxing royalty including the likes of Andre Ward, Shane Mosley, Antonio Tarver and Terence Crawford, Jalolov put an exclamation mark on an exciting night of boxing during an historic weekend of Hall of Fame inductions which will include the last three classes of inductees during Sunday’s ceremony.

Jalolov was dominant throughout the entire fight, with the only question being whether or not he would continue his knockout streak. It looked likely in both the third and fifth rounds, as Jalolov wobbled Mulowayi but the game Belgium showed heart in making it out of both rounds unscathed. In the sixth round, Mulowayi was dropped for just the second time in his career by a left cross as the bell sounded. He rose to his feet and beat the count, but was knocked down for good with yet another signature left hand at 1:20 of the final round.

“I thought I was going to stop him at the end of the sixth round when I dropped him, but the referee let him continue and the round was over,” said Jalolov, who was deducted a point for holding in the fourth round. “I thought that was the time. But I had to wait until the final round. I’m happy that I got the stoppage. I feel like I hurt him three or four times.”

Jalolov went past the fifth round for the first time in his career, landing 47 percent of his power punches and out-landing Mulowayi 99-17 in total punches.

“I definitely learned more than anything from this fight so I give my performance a C-plus or a B-minus because this is the type of fight that makes me go back to the gym hungrier and knowing there’s a lot more to do,” said Arias, who now lives and trains out of the Bronx. “But we were blessed this time because should he have been a little bit stronger, things could have been more disastrous.”

Arias jumped out to a commanding lead in the first half of the fight, executing the game plan by outboxing Green and landing the cleaner, harder punches. Cleveland’s Green grew into the fight in the later rounds, but it was too little too late and Arias was able to do enough to hold off the late rally.

It was a difficult fight to score, as all three judges agreed on just two out of the eight rounds but the punch stats backed up the judges’ decision as Arias out-landed Green 81-58. Green became the 213th fighter to have his undefeated record spoiled on SHOBOX.

“Everyone who I face always trains for me a thousand percent better,” continued Arias. “He was real complete. He didn’t really necessarily have any weakness that I could exploit. The reaction time he had was really good and he had good inner footwork where it took me a little too long to get into a zone because every strategy I used he seemed to have a good reaction.”

In the telecast opener, undefeated lightweight prospect Chann Thonson (11-0, 8 KOs) put on a boxing display, bruising, battering and eventually breaking down the previously undefeated Tyler Tomlin (13-1, 9 KOs) en route to a fifth-round TKO. Referee Mark Nelson stopped the action 1:01 into the round.

“I knew if I stayed in the pocket with him that the shots I was going to give him would put him away,” said Canada’s Thonson, who is trained by former Olympic bronze medalist and light heavyweight contender Chris Johnson. “Surprisingly, he was a little tougher than I thought because when I hit him hard, he wasn’t taking a step back. So eventually I knew that would be his own demise and it was just a matter of time.”

Thonson, who was fighting for the fourth time in 2022, controlled the tempo and distance from the opening bell and looked like the more relaxed and experienced fighter. He used his jab and straight right hand to cause both swelling around Tomlin’s left eye and serious cause for concern in Tomlin’s corner. Prior to the start of the third round, Tomlin’s father and trainer Darryl urged his son to pick up the pace.

However, it was Thonson who stepped on the gas even more. Late in the third round, Thonson landed a barrage of punches that hurt Tomlin and left his face a bloody mess. The sound of the bell temporarily saved Tomlin but his night would come to an end in the fifth round. Unable to avoid the constant punishment that Thonson was dishing out, the action was stopped after the ringside physician assessed Tomlin.

“I feel fine, I feel like I was in the fight. I just got caught with two overhand rights and I’m pretty sure one of them either broke or fractured my nose,” said the 22-year-old Tomlin. “It was in the second or third round when I got caught. I felt and it threw off the game plan as far as what I was trying to do. I got a little more hesitant than I should have. I just can’t get hit by those overhand rights. SHOWTIME, that’s what they do, they put good fighters against good fighters. I felt like I was going to come out on top but we have to go back and watch film and see what comes next.”

The event was promoted by DiBella Entertainment, whose owner, Lou DiBella, is a 2020 Hall of Fame inductee and will be formally inducted along with the classes of 2021 and 2022 on Sunday. The SHOBOX tripleheader will re-air on Monday at 10 p.m. ET/PT on SHOWTIME EXTREME®.