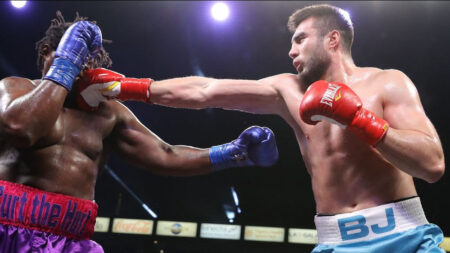 Bakhodir Jalolov believes he is already among the top 10 best heavyweights in the world – as he warned his rivals not to make him angry.

The giant Jalolov extended his frightening professional record to 12-0 (12 KOs) last weekend when he stopped the helpless Curtis Harper in the fourth round.

Jalolov has revealed the plan was to get at least six rounds under his belt in California but deliberate headbutts by Harper annoyed the ‘Big Uzbek’ who decided enough was enough.

After flooring Harper in the third, 6’7” Jalolov bludgeoned his American rival in the fourth and forced the referee to step in after 1:53 of the round.

The 2020 Olympic champion insists he should now be considered among the best 10 heavyweights in the world but will use 2023 to make that official.

“If I had followed my game plan a little bit better against Harper, it would have gone more than four rounds because the plan was to go six rounds with this guy, minimum, to get some experience,” Jalolov told Probellum.com.

“But it just so happened that he annoyed me a little bit with headbutts. I never try to go and hurt people, I try to go and do my best, land my punches, and not get hit.

“I would rate my performance as six out of 10, just because I didn’t really have a training camp for this fight. I was in Uzbekistan with the amateur team. My coach was with Bivol at this time in Dubai, so we only had a little bit of conditioning, a few sparring sessions and that’s why I needed two rounds to catch the rhythm and then get my timing.”

Jalolov was left only satisfied with his latest shuddering KO win and, ominously for the rest of the division, says he cannot see the ceiling on his potential.

“It’s just that every everyone has their own time, and my time is just not there yet. And we’re not in a rush. I’m following the plan of my team and when the time comes, I’ll be ready. I’m 28 years old. I’m not even in my prime yet, and when I get there, I will make everything the way it should be.

“Honestly, at this point, I just don’t see the limit to my potential. I’m just starting. I’m just barely getting into the pro game and I’m working with my coaches, I’m learning so much new stuff.   We are just starting to build a tank for 12 round fights.  So honestly, I just don’t know where the limit is, but I know that I’m going to improve and get much, much better.”