Women’s boxing is flying at the moment and the 30-year-old is surely the next big star off the production line.

The BCB Promotions managed and trained fighter schooled Manns who came into the contest unbeaten and with a reputation for heavy hands after four KO wins from her six fights to date.

That mattered little to Wolverhampton’s Bavvo who dominated the contest from the first bell to the last.

Bavington retained her European crown with a unanimous points win – 97-93 on two cards and
99-91.

BCB Promotions managed Cooper scored a fifth-round knockdown on the way to a dominant decision victory at the International Centre in Telford.

Referee Kevin Parker scored the contest 100-89 in the Worcester man’s favour as he secured his seventh win as a professional and picked up his first belt in what was an entertaining but one-sided affair.

The atmosphere inside the International Centre was electric as Cooper’s fans made their presence known right from the opening bell.

The contest embodied the best of the domestic scene with neither man willing to take a backwards step, but it was the relentlessness of Cooper’s attacks that made the difference.

Cooper, trained by Malcom Melvin, was dominant throughout and landed some real eye-catching shots, none more than a beautiful straight right hand in the fourth that sent Stewart’s mouthpiece flying across the ring.

Stewart was not to be taken lightly though as he often fired back with combinations of his own that ensured Cooper stayed switched on.

It was the 22-year-old’s ability to mix up his attacks to both body and head which was perhaps most impressive. Some of Cooper’s combinations not only took the breath of his opponent but also of those ringside.

The fight took place on the undercard of Liam Davies’ victory against Ionut Baluta. 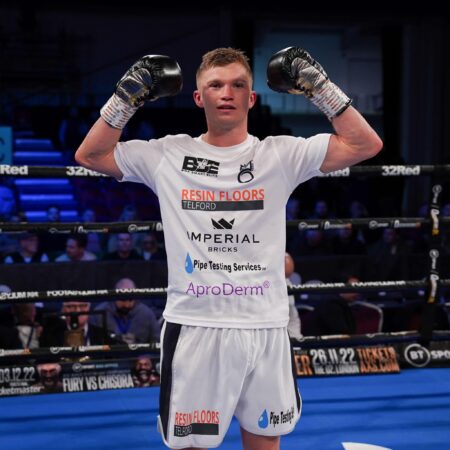 Macauley Owen extended his record to 5-0 with a decision victory against fellow lightweight Eduardo Valverde on Frank Warren’s BT Sport show at the International Centre in Telford writes Jack Heather.

BCB Promotions managed Owen made the perfect start in his hometown, sending his Spanish adversary to the canvas midway through the opening round thanks to a beautiful straight left hand.

The Spaniard remained defiant throughout though and showed some serious toughness to make it through to the final bell as he continued to be met by a barrage of shots from the BCB fighter.

Owen, trained by Shiney Singh, started targeting the body of his opponent in the later rounds and he had success doing so, with the Nicaraguan-born Valverde’s grimaces worsening with each shot that landed.

It was not to be though as the experienced Valverde managed to get through the rounds and deny Owen what would have been his second stoppage win in the professional ranks.

The 25-year-old dominated all six rounds and cruised to a dominant points triumph; referee Chris Dean scored the contest 60-53 in favour of the southpaw