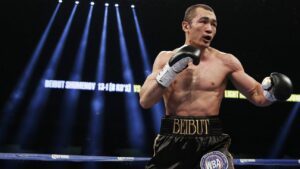 The World Boxing Association (WBA) withdrew its recognition of the cruiserweight champion Beibut Shumenov due to his long inactivity, promoting Ryad Merhy to champion, who must face Cuban Yuniel Dorticos in his next bout.

The Kazakh had become champion on July 7, 2018 when he defeated Hizni Altunkaya. In October of that year he was ordered to fight Arsen Goulamiriam. In January 2019 the WBA summoned a Purse Bid for the two contenders to fight and Don King Promotions was awarded the rights to make the event in May of that year.

However, health problems prevented Shumenov to fight and he presented his case to the WBA Medical Committee, who informed the Championships Committee that, indeed, Shumenov was not fit to step into the ring at that time.

Such a situation led to his appointment as Champion in Recess until August of that year when Don King Promotions indicated that he was ready to return. In September 2020 he was ordered to fight Ryad Merhy but Shumenov’s team asked for special permission to fight Raphael Murphy in a voluntary defense on January 29.

On January 22, Shumenov and his team sent a communication informing the WBA that they had withdrawn from the bout.

As rule C.14 states, A. Boxers, their representatives, and promoters are obligated to “know and be familiar with all Associations rules. Rule C.13, B. A champion must remain active and regularly defend his title. Within sixty (60) days of the expiration of the mandatory defense period, a champion is limited to fighting only a mandatory contender or leading available contender, and rule C.27 states that A boxer’s title, status, or recognition may be lost, removed, or vacated for three reasons, loss in a bout, violation of the Association rules or an alleged criminal conduct found by a national agency.

The WBA’s decision was based on the internal rules. Shumenov has not defended his title in more than thirty (30) months despite the WBA’s requests that he participate in any of the multiple opportunities that were presented to him..

For that reason, the recognition has been withdrawn and now Merhy is the cruiserweight champion. The Belgian will have 30 days to negotiate a fight with Dorticos. If no agreement is reached, the WBA will open the fight to Purse Bid and the purse distribution will be 75% for him and 25% for the Cuban.