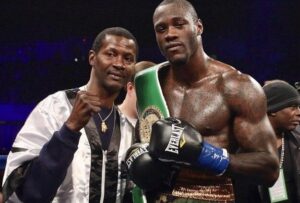 After the loss to Tyson Fury in February, other than the ‘reasoning’ to his loss (which of course was not due to Fury being the better man on the night), he has remained uncharacteristically quiet. Then he came out with a video on social media that has shocked the boxing world.

Tony Bellew: “Insane, really insane. Whatever he’s been smoking it needs to stop. It’s absolutely insane. You have to understand the checks we go through. Once we arrive at the arena, from the minute we get there we’re followed by a drug tester. This is when you’re at the top of the sport and you’re in world title fights. So you get to the arena and you’re followed everywhere by a drug tester,” Bellew told Talk Sport.

“The minute you start getting ready for the bout, you’re getting your kit on, your clothes on and your hands wrapped. The minute your hands start getting wrapped you’ve got someone from the opposing dressing room in your changing room. He watches everything that goes on. You also have an official that’s with you at all times.

“Then the gloves go on. At no point that them gloves are on your hands can they come off, can they be taken off, without an official with you and without someone from the other team. It’s impossible what he’s saying.”

Dillian Whyte: “I don’t think we’ll see him in the ring ever again. He’s a coward and a disgrace. The behaviour he’s shown and the way he’s acted, blaming everyone apart from himself, getting rid of the only person in his corner who knows anything about boxing? It’s weird,” Whyte told Sky Sports.

“I didn’t give one excuse after my defeat. I went straight back into training and started working on what I did wrong.”

Bob Arum: “We haven’t heard a lot from Wilder. So he is probably watching television, and all I can say about his Instagram post is that he is mimicking Donald Trump,” Arum told IFL TV.

“In other words, likes come up with conspiracy theories. Do anything but put the blame on yourself. For him to castigate Kenny Bayless, the referee, and Mark Breland, his chief cornerman the way he did is disgraceful. Because they acted properly and they saved Wilder’s life from taking any further punishment. When he was completely out and getting thrashed by Tyson Fury.”