Bert Cooper vs Joe Savage was a former heavyweight world title challenger (against Evander Holyfield) vs. a bare knuckle fighting champion from the United Kingdom.

In the UK, I remember there was a half page article about Joe Savage, the undefeated bare knuckle street fighter that wanted to make his name as a professional fighter, choosing boxing as the sport he wanted to take on. Unfortunately, it takes more than just being good with your fists to crossover to the ‘noble art’ of boxing, and a 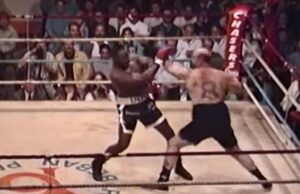 savage lesson was about to be taught to the man that called himself “lethal weapon.”

He was initially due to fight in a tournament but had to pull out so this match was made shortly after.

Unbeaten 41-0 (all KO’s) Savage (245lbs) entered the ring against former world title challenger Bert ‘Smokin’ Cooper (230lbs) with his hopes of making an impact against the heavyweight boxing elite at the Civic Arena, Nanaimo.

Sadly, reality kicked in as to why boxing is a professional sport and has a structure of being an amateur then to move onto the paid profession. Savage was brutally ‘smoked’ on his celebrated pro debut and was to never fight again with a pair of boxing gloves on.

Being fair to Savage, this was jumping into the ‘deep end’ with a fighter that was well known for the many tough wars he had been in and was a very hard puncher. He could of taken on an array of journeymen to gradually learn his craft and make the transition that much less painful but the decision to jump in with Cooper was either a huge mistake on how good Cooper actually was or a complete misjudgement to how good himself was as a fighter.

Blindness, stupidity…whatever the reason, Bert Cooper vs Joe Savage was a painful lesson that many others have also made and many more will do over the years. Savage at least can tell the tale of how he went to America and took on one of the best heavyweights of the 1990’s with no boxing experience 🙂

Remember to fully explore our boxing website. It has the latest boxing news, boxing results, boxing vlog videos and much more boxing content that is being added to daily.