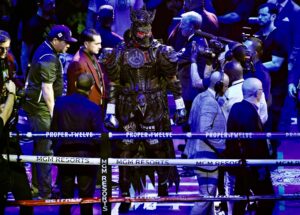 Seven months later and it seems that a loss to the better man cannot be accepted. First it was the heavy costume, then the tampered gloves and now it is a bicep injury. Next excuse, sorry, reason?

Wilder supposedly underwent secret surgery on the troublesome bicep after the fight and has claimed this was an issue in the fight.

IF there was an injury, why did Wilder not postpone the rematch? With so many arguing (and rightly so) he had lost the first fight, surely you would want to be at your best physically to gain revenge? And why is this now in the news seven months later??

Junior Fa, the unbeaten New Zealander heavyweight who was part of Wilders training camp told Sky Sports: “I was very shocked by the Wilder defeat. The lead up and the training was actually really good and Deontay was looking great.

“I think he did hurt himself towards the end of camp, which I don’t think would have played too much into the fight, but then I don’t really know the extent of the damage of the injury that he sustained.”

Fa added: “Yes, the bicep injury. I don’t know the extent of the damage, but he did hurt it, yeah.

“What I do know is that he did get injured, but I was very surprised by Fury’s game plan.

“As soon as the fight started, and I saw Fury not really taking a backward step, trying to push Wilder to the ropes, I was thinking, ‘Oh man, this is going to be a hard night for Wilder.’

“Fury just basically did what he said he was going to do, which was stop the biggest puncher in the world. That was a very, very good performance from him.”

Fa has also sparred Anthony Joshua and admitted both Joshua and Wilder have tremendous power, but the Bronze Bomber edges it.

He said: “I sparred AJ before we knew how good he was, so back in 2011 just after the Commonwealth Games.

“From what I can remember, from AJ in terms of comparing power, I would say definitely Deontay Wilder is the biggest puncher.

“It’s just a different type of power. I can’t really explain it.

“I know AJ has got serious heavy hands and they’ve got a bit of a snap to it too, but Wilder, I don’t know man, he’s just got a punch that dazes you straight away.”