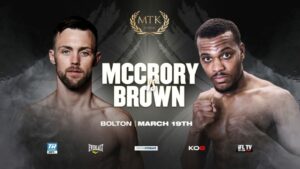 The upcoming #MTKFightNight event on March 19 has added even more firepower – after a number of mouth-watering bouts were added to the card.

The event takes place at the University of Bolton Stadium, and will be broadcast in the US on ESPN+ in association with Top Rank and worldwide on IFL TV.

There are already two must-see title fights on the bill, as Karim Guerfi defends his European bantamweight title against Lee McGregor, and Maxi Hughes and Paul Hyland Jnr collide for the vacant British lightweight title.

MTK Global Promoter Lee Eaton said: “This was already a spectacular bill due to the two title fights, and the undercard is now shaping up extremely well.

“The fight between Padraig McCrory and Germaine Brown could steal the show, and we also have fantastic contests involving Jamie Robinson, Shabaz Masoud and Paul Ryan.

“It’s the second of two huge events we have that week, and both cards are full of brilliant fights from top to bottom.”