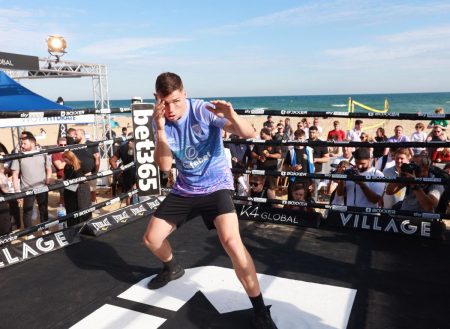 BOXXER took over the Bournemouth beachfront today for a unique seaside set-piece at which press and public encountered the world-class professional boxers of this Saturday night’s BOXXER event.

Bournemouth’s own Chris Billam-Smith was on hand to work out and answer questions ahead of his headline showdown with London rival Isaac Chamberlain in this weekend’s main event, with BOXXER promoter Ben Shalom watching on.

Ben Shalom, BOXXER CEO and Founder: “This is the one Chris Billam-Smith always wanted. He wanted to come back to Bournemouth. The turnout here today shows he’s a big star here in Bournemouth and he’s here to defend his European and Commonwealth titles.”

“Isaac Chamberlain, people will remember a long time ago when he fought Lawrence Okolie after only having had nine fights and being 23 years old. He’s built himself back up and people are underestimating where he is today both mentally and physically. We have an absolute 50/50 Cruiserweight war on our hands with a lot on the line as well on Saturday night.”

“I’ve never had a debut as anticipated as Ben Whittaker’s, with SugarHill training him as well. He’s got the perfect set-up to become a superstar, we see it for the first time on Saturday night and I really think he’s built for this. I’m not nervous, he’s not nervous”

Chris Billam-Smith: “It’s an honour for me to box in my hometown in front of my friends, family, and supporters. The town’s been behind me all these years. I’m fortunate to have such a great coach and be part of a world class gym surrounded by world class fighters that make me better. Isaac’s an amazing fighter, probably the hardest fight of my career so far, but that’s what I want, someone who can bring the best out of me.”

“Pressure is a privilege. It brings out the best in me, the harder the fights, the more riding on the fight, the better I’ll be, and I’ll always find a way to win if I have to.”

Ben Whittaker: “Pressure makes diamonds. There’s been a lot of talking, and Saturday I have to back it up, and I believe I will. I was ready for July 2nd, but this has given me more time to develop, more time to learn my craft, and more time to mature as a professional. I’ve been out in Miami, and that let me really focus. It’s all about finesse, and polishing the skills I already have. I want to show a mature performance on Saturday.”

Frazer Clarke: “Talk is cheap, and I want to prove myself by fighting better and better opponents through my career. We’re by the sea and everyone’s enjoying themselves with fish and chips, but I’m not here for a holiday. I’m here to do business, make no mistake about it.”

Caroline Dubois: “All my learning is being done in the gym. These fights help me get ready for doing it under the lights but we’re working on improving day-in day-out in the gym, so I feel like I’m coming on in leaps and bounds. I enjoy getting in the ring and sparring, every time I spar I get more confidence in myself and my ability.”

Stevie McKenna: “Me and my brother are very competitive. He got the knockout last time out so I want to get the knockout on Saturday night. I’ll be bringing my entertaining, destructive style. I go in to do damage, every punch I throw is with vicious intent and I want to show everyone how good I am. I can fight on the inside, I can box at long range. Hopefully I’ll put on a show and break into the top 10 in the world by the end of next year.”

Mikael Lawal: “I’ve been out of the ring for a little while and I told my team I need to fight someone who can get me ready to fight Deion Jumah.”

Hassan Azim: “Obviously I train with an amazing stable and it’s amazing to be around them. Chris Billam-Smith is in the main event on Saturday while I’m on the undercard. I’m only young and now I’m just gaining experience and a few years down the line I’ll be in the main event. I’m going to show improvement on Saturday. I’m improving all the time. I’ll show a six-round boxing masterclass but if I get the knockout it’s a bonus.”