Billy Joe Saunders: I Want Andrade in February, Then Canelo in May! 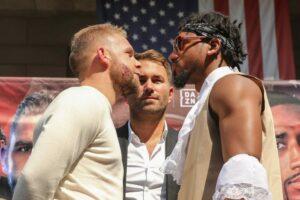 Billy Joe Saunders has laid what he wants in 2021 – Demetrius Andrade in February, and Canelo Alvarez in May.

WBO super-middleweight champion Saunders (30-0, 14 KOs) was last in action in December, where he retained his title with a unanimous decision victory over Martin Murray.

He is hoping to secure a showdown with pound-for-pound king Canelo in May, but there is also talk that the Mexican superstar could first return in February in order to take on mandatory challenger Avni Yildirim.

With that in mind, Saunders also wants a fight in February, and is calling on WBO middleweight champion Andrade to step up in weight and settle their differences once and for all.

Saunders told IFL TV: “I’m supremely confident of knocking Andrade out cold. I love boxing southpaws, I love fighting someone with his style.

“I’ve got a very good track record against southpaws. I would love to give him a hiding. Let’s get it on, and rock and roll. Vacate the WBO 160 title, move up and you’re the mandatory. I can make 160, but why would I want to go back down to 160 when all the big money fights are at 168, and all the big talents have come up to 168.

“Move up, come up to 168. I don’t want to be sitting around. Let Canelo do his thing. If he’s fighting in February, I would love to fight him in May, but if he thinks I’m going to be sitting around until May twiddling my thumbs, he’s got another thing coming.

“I’m not going to be doing that. I’m back in the gym, I’m in shape, let’s get it on. Let’s stop beating around the bush and waiting around.”

Steven Ward vs. Hafthor “The Mountain” Bjornsson Heads to Dubai Gervonta-Santa Cruz Was The Fight of The Year & The KO of The Year