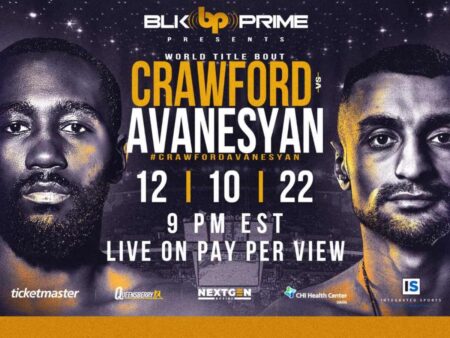 The biggest fight to end the year between the best fighter in the world, WBO welterweight world champion Terence “Bud” Crawford (38-0, 29 KOs) taking on David Avanesyan (29-3-1, 17 KOs) in a PPV showdown, that will take place at the CHI Health Center in Omaha, Neb. on December 10, now has an official broadcast team.

Crawford vs. Avanesyan, a 12-round WBO welterweight world title clash, will stream live on BLK Prime and across all cable and satellite outlets for the price of $39.99. BLK Prime, a Silicon Valley-based tech company, is a subscription video-on-demand platform that utilizes elite technology to bring the best picture-perfect stream available. The telecast will begin at 9 p.m. ET / 6 p.m. PT.

Lupe Contreras, a veteran ring announcer of over 20 years, has called some of the biggest fights the sport has seen. Traveling to every realm of the globe to introduce the best pugilists in the world, when Contreras calls a fight, you know it is a big deal!

Todd Grisham has been innovating sports entertainment broadcasts from the WWE, to being a staple of the DAZN boxing crew, Grisham is becoming one of the iconic figures in the sport, and will be guiding the action on Saturday.

Paulie Malignaggi is a former two-division world champion holding the IBF super lightweight title, as well as the WBA welterweight title. Malignaggi transitioned into the field of commentary in the past decade, in which he was quickly regarded as one of the best young voices in broadcast journalism, and his vibrant personality has earned him a close connection with the fans.

Antonio Tarver is a five-time light heavyweight champion, holding the WBC and IBF titles two times, and the WBA title for good measure. Tarver has been in some of the greatest fights, and is now calling some of the modern great bouts on BLK Prime.

Cheyenne McCargo is a popular YouTuber, with thousands tuning into his daily livestreams. McCargo will offer the voice of the fans for the BLK Prime broadcast, scoring the undercard bouts.