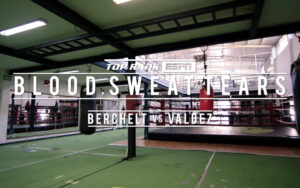 Top Rank shared on its YouTube account an interesting show called “Blood, Sweat and Tears: Berchelt vs. Valdez”, where details of the training of both warriors are shared.

Berchelt (38-1, 34 KOs) has defended his world title six times, five by stoppage, including wins over compatriots Francisco Vargas and Miguel “Mickey” Roman. Valdez (28-0, 22 KOs) made six featherweight title defences before moving up to super featherweight, where he posted knockout victories over Adam Lopez and Jayson Velez.