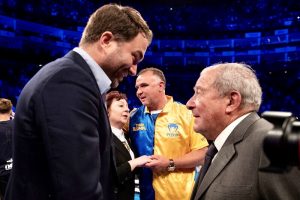 “The WBC approved the trilogy contract and that provides for postponements. And certainly, if you can’t do it with spectators, a reasonable postponement would be okay. It’s a different kind of fight. The Fury vs Wilder fight in the United States is a major, major fight. Dillian Whyte, nobody ever heard of him in the United States,” Arum told Talk Sport.

“Eddie Hearn tells you guys something different from what he tells me. But he has to take the position that advocates for Dillian Whyte. I’m absolutely clear that the Wilder fight will push ahead and then we’ll see. Then, if he wants to push Dillian Whyte to fight the winner of that fight and to deprive Joshua of the tremendous revenue that would come from a Fury vs Joshua fight, that’s on Eddie.”

“I can’t talk for the WBC, I know based on my conversations with Mauricio that if the fight had to be postponed to the beginning of February, that fight would go on. What then he would determine in terms of Whyte, he might say, ‘No, Fury if he beats Wilder will have to fight Whyte.’ And therefore that would affect the Joshua fight, but again, one step at a time.”

“All I know is that we are not ingrates. Tyson Fury, Top Rank, we were given the opportunity by Wilder… How do you turn your back on Wilder? That would be absolutely improper. gain, our goal is to do Fury and Wilder, and then if Fury wins, to go right to a Joshua fight plus a rematch. That’s where we stand. It would be an absolute travesty. All these mandatories, schmandatories. People are looking for what the public wants.”