Bob Arum On His Promoted Heavyweights 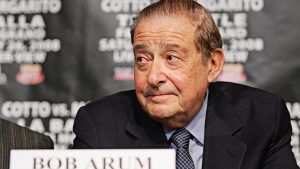 Manager of Ajagba, James Prince has high hopes for his heavyweight to develop into a champion.

“No matter how much you tell them, ‘Hey, these little guys in the lower weights are more exciting and make better fights,’ the people love the f–king heavyweights,” Arum told Yahoo Sports.

“There is nothing wrong with stocking up on some talented young heavyweights and putting them out there. I mean, these guys all have a lot of ability and we can put a lot of good fights on with them.”