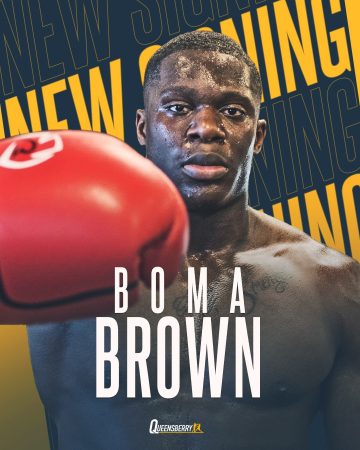 Frank Warren has bolstered the heavyweight contingent at Queensberry with the signing of professional newcomer Boma Brown.

He is trained by Paul Stevenson at the Everton Red Triangle gym in Liverpool, where he counts the formidable trio of Nick Ball, Andrew Cain and Brad Strand as teammates and is looking to emulate their success on the Queensberry and BT Sport platform.

“I am buzzing to have signed with Frank and he is somebody who, since I started boxing, I have always looked at and thought it would be nice to meet him one day,” said Brown on his promotional union. “So I was kind of shell shocked more than anything to be meeting him, but it was really nice. He seems like a down-to-earth fella who comes from a humble background, he is somebody I can definitely relate to and want to impress as well, going forward.”

Brown, just turned 27, took up boxing after being inspired by the 2015 Las Vegas Showdown between Floyd Mayweather and Manny Pacquiao. He was based in the Midlands where he was undertaking a degree course in Business and Law at Coventry University, where he ultimately graduated with a 2.1.

“I remember watching the Mayweather-Pacquiao fight years ago and it made me want to try out the sport. It sounds like a cliche, but once I tried it, I fell in love with it straight away and never looked back.

“I took myself to a local gym in Coventry called the Red Corner Boxing Club and did a few classes before they referred me to an amateur club called Bell Green and I boxed there before moving to Birmingham and joining Jewellery Quarter ABC, that was unfortunately closed down during Covid and we all moved to Pat Benson’s Boxing Club, which is the old Small Heath Boxing Club.

“So I boxed there and had 21 fights, with 14 or 15 wins. I would say I’m a puncher, anybody who has been in the ring with me or sparred me will talk about my power and it is something I do have in abundance.

All roads led to Liverpool for the die-hard Arsenal fan due to his girlfriend – and now new mother to a baby girl – returning to settle in nearby Warrington, so Brown re-established contact with trainer Stevenson after encountering him during his amateur days.

“Funnily enough, I boxed one of Paul’s lads in the amateurs and sort of just kept in touch with him on Facebook and stuff like that. Towards the back end of last year he reached out to me and asked what my plans were.

“With my missus about to have a baby we were moving back to Warrington so things fell into place a little bit. I told Paul the situation and he said to come over to Liverpool to have a few sessions and see how I found it.

“I did that, it clicked straight away and I have been there for four or five months now. So my life has totally changed and it is funny how things work out, what with moving to Warrington and it being close to Liverpool, leading me to a great gym and trainer.

“The mentality of the lads in the gym is rubbing off on me massively and you can see why they are doing so well. Being in the gym with them these last few months has been amazing, they have all welcomed me in nicely and I am starting to get the hang of it all. It is going to be a good ride.

“Frank said to me that he plans to get me started in September-October time and also mentioned that a Dubois or Joyce undercard would be a good place to announce myself.”

Frank Warren added on his new heavyweight: “Boma is going to be an exciting addition to the heavyweight ranks and we are blessed here at Queensberry to have such a stronghold in the division.

“The fact he is being trained and prepared by Paul Stevenson in Liverpool suggests to me that Boma can make a huge impact and go far in the sport. If Paul can conjure up a heavyweight version of Nick Ball or Andrew Cain then we really will be onto something special.

“We are getting to the point where we could fill a card with heavyweights and I am looking forward to seeing what Boma brings to the party in the near future.”

News on Brown’s pro debut date will be announced tomorrow…