Bouts galore with Mexico vs. Cuba 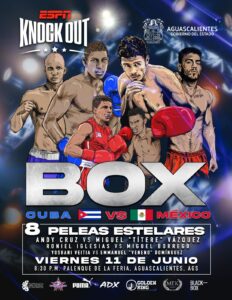 On June 11 at the Palenque of the Aguascalientes Fair, Mexico, the Cuban boxing team that will compete in the Tokyo Olympic Games will strut their stuff.

The Cuban team led by its four-time world champion and Olympic gold captain Julio César La Cruz, has been preparing for several days in Aguascalientes with the right attitude at high altitude.

Without a doubt, the most anticipated fight will be between world champion Andy Cruz and Miguel “Títere” Vázquez, an experienced former champion of great technique.

In other interesting duels Cuba vs. Mexico, Yosbany Veitía will face Enmanuel “Veneno” Rodríguez, Roniel Iglesias will face José Miguel Borrego. In addition, there will be rivals Lázaro Álvarez and Mario Díaz, La Cruz vs. Franky Rivas and Dainier Peró vs. Edgar Ramírez.