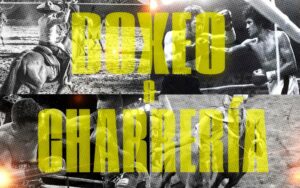 Boxing is known as a contact sport, where the fighters face each other, using their fists with skill and intelligence to hit, yet avoid being hit.

Charrería, a popular practice in Mexico, is the set of skills and abilities that riders, called charros, performed with horses, executing showy movements of great spectacularity.

In a similar vein, charrería requires a lot of discipline and concentration, as well as hard work and constant practice to be able to reach a supreme level.

There are styles of the clothing with which the Mexican charro is identified, such as his wide brimmed hat and the short decorated jacket. In addition, it is essential to have a well-trained horse, as it is a fundamental element which reins in charrería as a beautiful and impressive practice.

Many boxers have emulated the charro dress with robes and hats when entering the ring. Just as there is no charro without a horse, there is no boxer without a trainer.

The World Boxing Council was inspired by the Charrería to manufacture the MESTIZO belt, which will be awarded to the winner of the long-awaited fight between Mexican Saúl “Canelo” Álvarez and English Billy Joe Sanders, on May 8 in Dallas, Texas.

The MESTIZO belt was created by artists Raul Perez Carmona and Vianey Rebeca Flores Martinez. It consists of pita embroidery in finest leather. Also, two-thread embroidery with embossed blossoming flowers. It`s the product of 305 hours of work. The plaque was made by Miguel Angel Jurado in a process that lasted 50 hours and the final assembly was produced at Industrias Reyes with another 35 hours of craftsmanship.

Pita is a fibre that comes from agaves that, due to the climate, is produced only in Oaxaca, Chiapas and Guatemala. It is extracted from the plant that is peeled off by hand and with rustic instruments. The rubber residues are removed from the long maguey leaves that are manually scraped until the fiber of the ixtle is obtained.