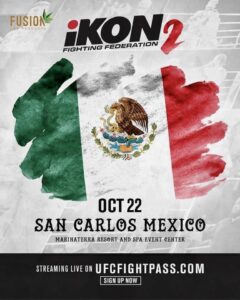 “We’re excited to return to San Carlos and work again with our friend, Emanuel Romo, from De La O Promotions,” said Keith Veltre, CEO/co-founder of RJJ Boxing. “We are grateful to him and the Marinaterra Hotel Spa for giving us a beautiful venue so we can promote during the pandemic. This will be our second iKON event and we couldn’t be happier to have Bella Mir, the 17-year-old daughter of MMA legend Frank Mir, making her pro debut on iKON2.”

Undefeated Alan “Cachorro” Solis (10-0, 6 KO’s), a 6-time Mexican National amateur champion, headlines in the 8-round main event against veteran Mexican lightweight Eddy “Dinamita” Valencia (15-4-6, 5 KO’s). The 21-year-old Solis had an amateur record of 87-6 and he was selected as the No. 1 amateur in Mexico’s largest state, Chihuahua. He will be stepping up in terms of opposition versus Valencia, who has already defeated a 10-0 fighter, Ronald Ruelas, by way of a third-round technical knockout. He also fought a draw with 20-4-1 Diego Eligio last year.

The MMA action starts at 9 p.m. ET. Fresh off his fight in the Dana White Contender Series is Mexican lightweight Alejandro “El Galito” Flores (17-3-0), who is matched against Andy “Golden Boy” Perez (7-11-0), of Tucson, Arizona, in the iKON 2 main event.

Mir, fighting out of Las Vegas, will make her much anticipated debut in a bantamweight match against pro debuting Danielle Wynn (4-3-0), of Atlanta. Bella’s father is legendary 2-time UFC heavyweight champion Frank Mir, in the co-featured event.