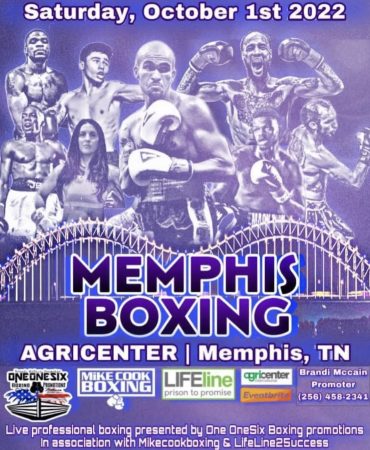 One One Six Promotions in association with Mike Cook Boxing and Life Line 2 Success brings professional boxing back to fans in Memphis, Tennessee at the Agricenter. The main event will be middleweight Tennessee native Mike Cook seeking to keep his undefeated record intact against an opponent to be determined.

Also, in action will be decorated female amateur Stevie Morgan making her second professional bout. In Cruiserweight action, Allen Melson will be taking on Deandre “The Equalizer” Nicholson in six rounds of action. Melson who last fought Top Rank and medalist Richard Torrez Jr in March, looks to get back into the win column.

On the undercard also will be Chicagoan Harold Jackson versus undefeated Jimmy Ford of Lake Charles, Louisiana for the vacant Alabama State Jr. Middleweight title and the American Boxing Federation Jr. Middleweight title. In an all-action prospect bout, welterweight Jesse Fletcher will take on Izale Kimble in 4 rounds. Both Fletcher and Kimble both had their hands raised in their last bouts by exciting Knockouts their last time in the ring on McCain’s last Memphis show.

For more information, and regular updates on our fighters, events, and promotions, please visit oneonesixpromotions.com

ABOUT ONE ONE SIX PROMOTIONS

ONE ONE SIX Promotions is an Alabama-based combat sports promotion company created by Brandi McCain. McCain is the owner and operator of One One Six Boxing Promotions, currently the only licensed boxing promoter in Alabama, and one of the female boxing promoters in the country