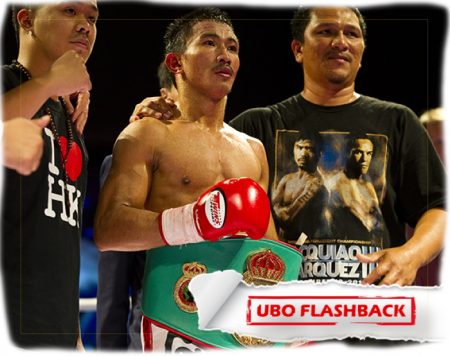 Turning pro in May of 2006, Filipino Fernando Lumacad compiled a record of 19-1-1 (7) on his way to receiving his first shot at a world title, the vacant IBF Super Flyweight, on June 27, 2009 against Jorge Arce in Atlantic City.

His sole defeat at that point had come on points against former WBC World Champion On Doowiset (53-8-1) in Bangkok, but the fight was competitive and Lumacad had proved he could compete at a very high level.

But Mexican star Arce had too much for him on the night, and Lumacad lost in the third round.

He build himself back up, won the WBC Continental title against fellow Filipino Ricky Sabia (8-5-1), and on April 26, 2012 in Hong Kong he was matched with another compatriot in Glenn Suminguit (12-1) for the vacant Universal Boxing Organization™ (UBO) World Bantamweight crown.

This time Lumacad would not be denied, as he boxed excellently on his way to a clear unanimous decision (117-112, 117-111 and 119-109), impressing many at ringside including iconic former world champion Ricky Hatton.

Unfortunately Lumacad never got to defend his UBO world championship. Three months later he lost a non-title fight to Mexican Hernan “Tyson” Marquez (33-2) by very close majority decision, and his title was left vacant as a consequence.

Lumacad went on to win some and lose some, including decision defeats to world class opponents such as Carlos Cuadras (26-0), Narast Aienleng (48-4), and Karoon Jarupianlerd (23-7).

How bad do you want it? The Viviana Ruiz story

Boxing stories: When the numbers lied and Maquilon had his last big night