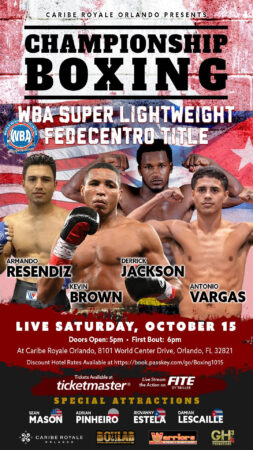 Tickets from $40 are on sale now at Ticketmaster and will also be available on fight night Caribe Royale box office. Those unable to attend can watch the card on Fite.TV

Headlining is a ten round contest between Kevin Hayler Brown and Adriano Ramirez for the WBA Fedecentro junior welterweight championship.

Fighting out of Las Vegas by way of Cuba, Brown turned pro in August and demolished former world champion Jose Alfaro in two rounds. The 28-year-old’s aggressive style and willingness to face quality opposition from the get-go earned him recognition among fans as a fighter to keep an eye on.

Living and fighting out of Jarabacoa, Dominican Republic, Ramirez is 12-4 with 7 wins by knockout. He’s riding a two fight win streak and is confident he’ll make it three in a row against Brown.

Orlando native Derrick “Diesel” Jackson faces his toughest foe to date when he meets heavy-handed Damian “El Pollero” Bonelli of Buenos Aires, Argentina in a junior middleweight matchup. The 20-year-old Jackson is a perfect 9-0 with 5 knockouts. In his first fight under new trainer Herman Caicedo, Jackson stopped Marklin Bailey in August and will fight in his first eight rounder against Bonelli.

Middleweights Jose Armando Resendiz of Nayarit, Mexico and Venezuela’s Heber Rondon meet an in intriguing eight rounder. A combined 32-2 with 21 knockouts, the Resendiz-Rondon winner could land a significant fight in the near future.

2016 US Olympian Antonio Vargas of Kissimmee, FL battles Chile’s Juan Pablo Meza in a six round bantamweight tilt. At 14-1 with 7 KO’s, Vargas looks for a third straight knockout since ending a 2 ½ year hiatus in July.

“The Caribe Royale will once again showcase many of boxing’s future stars.” Said Amaury Piedra of Boxlab Promotions. “We’ve got 14 fights featuring boxers from all over the world. With a victory in only his second pro fight, Kevin Hayler Brown could earn a world ranking on the fast track to a world title. From top to bottom, fight fans are in for a great evening of boxing on October 15.

Doors open at 5 pm and the first fight is scheduled for 6.