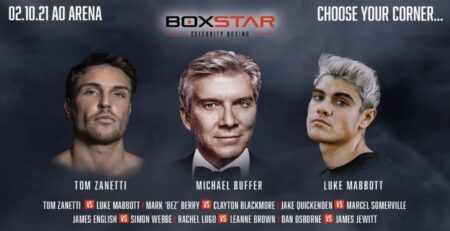 BOXSTAR Celebrity Boxing will present the biggest Celebrity Boxing event ever held in the UK, live from the AO Arena in Manchester only on FITE. The event features the legendary Michael Buffer as the Master of Ceremonies, the amazing Chris Kamara hosting and former BBC Radio One DJ Charlie Sloth dropping bangers on the deck. It’s a new kind of ratings war as reality stars from shows like Love Island, Real Housewives and jacked models and social media powerhouses take their grievances to the ring. They’re not messing around — Boxstar demands every competitor puts in the time with the top gyms and coaches across the UK. These fighters are bringing it. Order now on FITE.

“Over the past 25 years, I’ve been part of many major nights of boxing at the AO Arena in Manchester,” said legendary boxing announcer Michael Buffer. “On October 2, the arena will again have an electric atmosphere for Boxstar Celebrity Boxing as the anticipated sold out crowd will see their favourite celebrities compete in the ring. Some of the most well known and popular stars in the UK have been training for months with many daily hours in the gym to be a part of this presentation. I’m really looking forward to this as I have a feeling it’s going to be something special. Let’s get ready to rumble!”

“This historic event will go down in media history,” said Darren Lamb, BOXSTAR UK owner and CEO. “Based on the success and momentum of social media and television stars nothing can prepare the fighters for what they are about to experience, ten weeks of intense training and then the night itself, at a sold-out AO Arena Manchester. Tom Zanetti is going to be a fantastic fight, but I think the ladies Leanne Brown vs Rachel Lugo could be the fight of the night. I have a vision with these events, and I think people will be blown away by the level of fighters we have engaged. It is going to be an incredible journey; hope you join me! I have worked my whole life promoting boxing shows both professional and amateur but this event opens up a whole new market, we already have Jake Paul and others in the USA making noise, my aim is to create a team to represent the UK talent and host a TransAtlantic mega show”