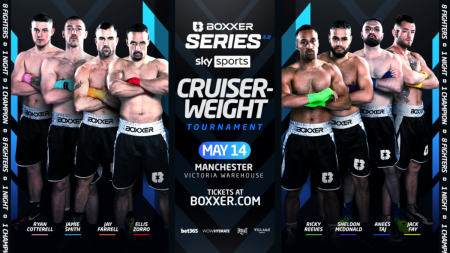 The eight boxers taking part in Saturday night’s BOXXER Series Manchester: Cruiserweights tournament convened in Manchester today for a live random draw to determine the four quarter-final matches which will open the event.

Olympic heavyweight hero Frazer Clarke was on hand to undertake the draw, which was streamed live by Sky Sports, dipping his heavy hands into the sea of names eight times until every boxer was matched.

The resulting four quarter-final matches are below. The tournament airs live on Sky Sports Action from 7pm this Saturday evening, with the largest pot of tournament prize money in British boxing history on the line.

The two most experienced fighters in the tournament face off in the very first round! Ellis Zorro walks into this tournament undefeated in 11 fights, while Jay Farrell can boast the same number of professional fights, but has suffered losses, albeit at a higher level than Zorro has fought at in the case of his Central Area title fight.

Both fighters will have been hoping to use their professional experience to come through this first round in a pool of competitors where over half the competitors have three fights or fewer, but now neither will have the edge in that regard.

Farrell is known as the harder hitter, and often turns his fights into brutal battles of grit where he thrives, where Zorro is a slicker, slightly more evasive boxer. Which of the two can impose their will on the fight, and create the kind of fight they thrive in, should be a huge part of who can walk out the winner.

The hugely successful amateur and rapidly rising professional Jamie Smith has emerged as a potential favorite to take victory in this edition of the BOXXER Series.

Smith is a disciplined, come-forward fighter, wisely able to put pressure on an opponent while also not overly exposing himself to potential counter attack. He has a strong jab but can also do efficient work at closer ranges, having found stoppages with medium-range hooks already in his professional career.

Jack Fay comes into this tournament having already had to fight homelessness in the last two years, as well as the two opponents he’s faced as a professional in that time. He’s an aggressive power-puncher who doesn’t mind trading blows with his opponent.

This provides a serious challenge for Smith, who might have to fight his urges and try to keep Fay at a distance in order to take victory.

A match-up between a former sprinter, and now teacher, and someone who holds all the necessary qualifications to be a lawyer holds intrigue from before the first bell has rung. Ricky Reeves is a solid all round boxer, who has already shown the ability to fight at long and close range in his professional career that has currently only lasted two bouts.

Anees Taj has managed to notch up six contests in his professional career, following on from serious success as an amateur that almost took him to the Olympics to represent Pakistan.

He’s a high-speed, high workrate fighter that could potentially thrive under the three round format of the fights in the BOXXER Series, where sheer output can have a huge impact on who takes the victory in these shorter fights.

Sheldon McDonald turned professional in boxing because former Cruiserweight World Champion Johnny Nelson saw him training and told him he was good enough.

That kind of support should give him all the self-belief needed on Saturday night, and has given him the self-belief to take victory in all three of his professional fights. McDonald has a piston-like jab and follows it smartly with thudding right hands that have damaged all the opponents he’s faced so far.

Ryan Cotterell comes into this tournament with the least professional experience, having only had a single professional fight in his career so far, which only lasted a single round. Cotterell is also the youngest in the tournament.

However, he has been boxing for over 16 years, and has had the same trainer – who guided him multiple amateur championships before turning professional – for around 10 years. Cotterell has a pressuring style, and isn’t afraid to work the body as well as the head. He might be looking to bring this fight to a slightly closer range than McDonald might want it.