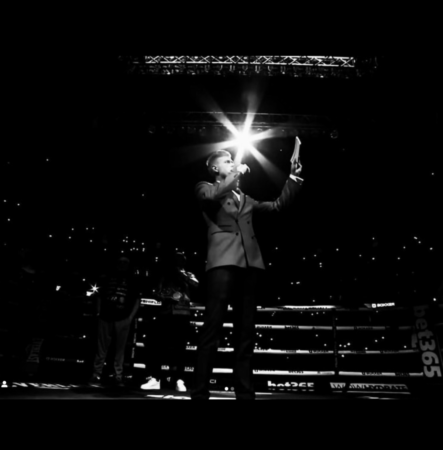 Standing 6’7”, ‘Big Mo’ is used to occupying the top spot: he was a Division 1 American Football player in his university days, where he also achieved a post-graduate MBA (Master of Business Administration), the favourite degree of many Wall Street executives.

A lifelong passionate boxing fan, the 26-year-old has now scaled the heights of yet another endeavour, just three years after he first picked up a microphone to try his hand at announcing.

Mommaerts’ rapid ascent of the ring announcer ranks is testament to his talent. The gifted Goliath made his BOXXER debut in Bournemouth earlier this year and was an instant hit with fans.

“I couldn’t be more excited to begin a long-term relationship with BOXXER & Sky Sports. When I started announcing my goal was to be on the biggest platform possible, so I could entertain as many fans as possible, and it doesn’t get bigger than Sky,” said Mommaerts.

“I think me announcing for BOXXER is a match made in heaven. BOXXER is a fresh and exciting company looking to really take over the industry. Ben Shalom is obviously young and so am I, and I think our visions really align as to how we can make BOXXER shows a top-tier event for people there live, and watching on Sky.

“I like building something from the ground up, and I like situations where everyone has their own role. The BOXXER team and the Sky team are both incredible. They work extremely hard to put on great events. I believe my role is pivotal to a great show, and I am thankful for the opportunity to do it alongside those two teams.”

BOXXER CEO and Founder Ben Shalom commented, “The first time I heard Big Mo announce, I instantly felt he would be a great fit for BOXXER. He’s young, he’s dynamic, he’s got a great voice and he’s got a very distinctive presence – Big Mo’s reach is longer than some of our heavyweights and his vocal range is even bigger than his reach. He brings great energy to every announcement he makes.”

The first event of his new agreement took place last weekend, when BOXXER: LEGACY sold out the 02 London with long-time rivals Claressa Shields and Savannah Marshall bringing their ten-year rivalry to a head in the main event.