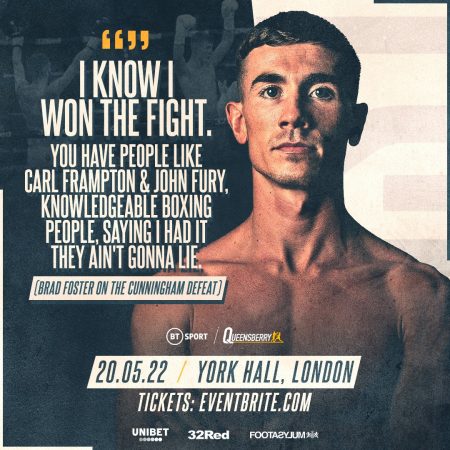 Brad Foster is back in the title mix at York Hall on May 20 but his disputed points defeat to Jason Cunningham last time out remains a scar that has yet to fully heal.

Foster is bidding to reboot his title collecting trait after being parted from his British, Commonwealth and IBF International straps in his challenge for the European title held by Jason Cunningham in October of last year in Birmingham.

After a hard-fought, often scrappy affair, commentators and pundits alike called Foster as the winner, only for all three judges to give the verdict to Cunningham, two of them by a single point margin.

Cunningham now has his sights fixed firmly on world level competition, while Foster will go again against an opponent who scored victories over Kyle Williams, TJ Doheny and David Oliver Joyce before dropping a tight majority decision against Michael Conlan.

Foster’s reflections on his ultimately unsuccessful European title challenge make it clear that the Cunningham itch is one he needs to scratch before too long.

“It is a hard one because I believe I won the fight, but it is in the past now and I can’t really do anything about it,” he reasoned. “The only thing that I can do is get the rematch and smash him, simple as that. Or get myself in the position where I am in the No.1 spot, which is what I am going to do.

“Listen, I can’t cry over spilt milk, I’ve got to get myself into a better position and keep moving forward.”

Sampling the sour taste of defeat for the first time, Foster confirms, is an even more galling experience when utterly convinced the decision would be going in his favour.

“It is an awful feeling, but you can’t feel like it forever and you’ve got to pick yourself up and go again. That is what champions do.

“It pisses me off more now, to be honest. I would have been in a different position with bigger opportunities. It is one of them though.

“Time being on my side shouldn’t make any difference. I would have been 24 with four belts. It was a step back for me that creates a bigger comeback,” added Foster with an upbeat nod to the future.

Foster knows too that he needs to box smarter. Against Cunningham, referee Mark Lyson was continually on his case and potentially this could have affected the way rounds were totted up by the judges. He also had a point deducted for a supposed low blow.

The Lichfield man suspects it was more about Cunningham using his cunning built up in a professional career of over 10 years.

“Everyone goes on about this ‘experience’,” Foster countered. “Is being experienced moaning to the referee about every shot? I think that is just experience of winging it.

“It wasn’t a low blow either when the point was taken off.

“There were a lot of things to it, Jason knows when to do things behind the referee and manoeuvres. That is the way his experience plays out.

“I’d fight him again! He has got the win against me so I want to fight him and he is the person with the title at the minute. We will see what comes up because I am not really focusing on Jason too much because I have got a geezer who is a better fighter and more dangerous than Jason in front of me on the 20th.”

Olympian Ben Whittaker signs exclusive deal with BOXXER Rankin vs. Ayala: Two days until history is made at the Hydro