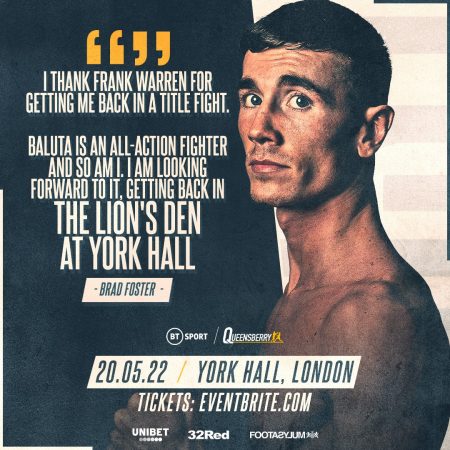 Brad Foster reckons he could be up against the best super bantamweight in Europe on Friday when he takes on Ionut Baluta, with the WBC International title at stake.

Foster returns to York Hall – scene of his memorable double-header against Lucien Reid – bidding to get back on the winning track after being parted from his British, Commonwealth and IBF International belts in his challenge for the European title held by Jason Cunningham in October of last year.

Despite firmly believing he should now be the proud owner of four belts, Foster was denied on the cards and now gets ready to jump straight back in at the deep end against the Madrid-based Romanian, who is a genuine force with previous in upsetting the home favourite.

“He is a very good fighter, probably the best in Europe, to be honest,” assessed Foster, who insists he gave no thought to returning to the fighting fold with an eight-round workout.

“Nah, because that is easy, isn’t it? It is easy to do an eight-rounder and just beat someone up, I’d rather have a fight that actually means something and take a bit of a risk.

“That is how you get recognised in this game, taking risks.”

Incredibly, for one so young at just 24, Foster is entering into his ninth straight title fight, with five of them being over the full 12-round distance. He now goes in over 10 against Baluta and promises a proper battle in Bethnal Green.

“I thank Frank Warren for getting me back in a title fight and me versus Baluta is a good fight. He is an all-action fighter and so am I, so it is good and I am looking forward to it, getting back in the lion’s den at York Hall.

“Hopefully it is a Lucien Reid II type performance, taking over London again with the boys from Birmingham, you know how it goes.

“You are going to see an exciting performance. I can’t tell too much but I am going to go in there and win. He will be coming to bring it and has had a long time to train. So listen, it is just going to be a good fight.

“Of course there are a lot of things I can improve on and you never stop learning in this game. Obviously, from the last fight, towards the end of the rounds I need to come on a bit stronger. There are a couple of things I have been working on, don’t worry.

“I know I didn’t get the decision against Jason but you can always learn something from certain fights. Maybe because I lost it I look back on the fight more. I look back and still think I won it, but you can still learn and improve from it and that is what I’ve been doing.”

Foster, of course, operates in what is a thriving division on the domestic front, with Cunningham and himself being hunted down by the likes of Marc Leach, Liam Davies, Andrew Cain and Chris Bourke.

The Lichfield man is happy to entertain some in-house warfare, but only if it doesn’t divert from his objective of climbing up the world rankings.

“Yeah everyone seems to be moving up to super bantam! It is a good division and if these fights benefit me and mean a good step in my career I am open to it. I just want good fights.

“They would be action-packed fights and I see myself at the top of that pile. I want to push on and they ain’t in my way, they need to fight me to get where I am. I am looking at people like Baluta, who is a step in the direction of world titles and getting those ranking points.

“That is why I wanted to fight him because it will progress me. Fighting the others at the minute doesn’t progress me. Yes they are good fights, but they don’t push me towards world titles.

“Baluta has had good fights with good people like Michael Conlan and I know he is a good fighter. I know I can go in there and beat him good, which is what I will be doing.”